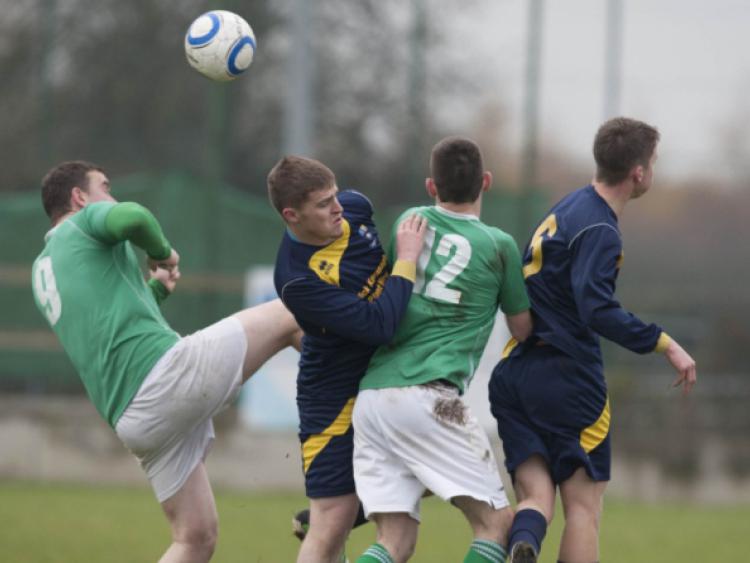 Although there were seven goals in this encounter this was far from a classic, as the home side were always in control and in truth probably should have won by more.

Although there were seven goals in this encounter this was far from a classic, as the home side were always in control and in truth probably should have won by more.

Abbeyleix were two up at the end of the first half added a further three goals in the second period. Rosenallis did muster somewhat of a comeback in the second half but in truth they were never in this game.

Abbeyleix’s Niall Wallace was first to threaten the score sheet snuffing wide from eight yards following good work from Garry Cantwell and Joe Bergin. However it didn’t take long for the number nine to make amends when a minute later he was hauled down by Rosenallis’s Ronan Doolin for a spot kick, referee Alan Lynch in the perfect position and pointed to the spot.

Wallace dispatched with aplomb giving Joseph Walshe in the Rosenallis goal no chance. Abbeyleix should have doubled their advantage in the twelfth minute; Joe Bergin was again the catalyst getting to the by-line before finding Gerard Fennelly who pulled his shot wide from ten yards.

Rosenallis were struggling to get a foothold in proceedings at this point and gave Gary Scully nothing to do in the Abbeyleix goal in the first twenty minutes. Niall Wallace stung the hands of Walsh on the half hour with a superb twenty yard volley which Walsh managed to push over.

Rosenallis had their first real threat on goal five minutes later. A cross from Alan Herbie just evaded the attention of the on-rushing Gary Hofmeister who found himself in space five yards out. Abbeyleix seemed spurred on by this near miss and had doubled their advantage in the thirty eight minute; again through the boot of Wallace.

A long kick out by Sully was superbly brought down by Wallace; he got the better of Steve McEvoy before deftly chipping Walshe from fifteen yards. Abbeyleix were deserving of their two nil first half lead.

Rosenallis perked up in the opening stages of the second period and had one back within five minutes of the restart. Left back Marcus Redmond started the move down the left hand side before finding Gary Hofmeister who beat his man and whipped in an excellent cross which was side footed home by the waiting Podge Gorman.

Rosenallis could and perhaps should have had a spot kick of their own in the fifty third minute, Niall Doolin dribbled into the Abbeyleix box and appeared to be clipped by Eoghan Fennelly but the referee wasn’t swayed.

Just as Rosenallis seemed to be working their way into affairs they were hit by a double whammy conceding two in as many minutes. The first, a speculative shot from Abbeyleix’s Gary Cantwell from all off thirty five yards which deceived Walshe. The second a tap in for Niall Wallace after subs David Cole and Daniel Mills combined to square for Wallace to tap in for his hatrick.

Rosenallis did manage a consolation in the eighty first minute, Gary Hofmeister putting through Podge Gorman who clipped past the on-rushing Scully for his second. With virtually the last kick of proceedings Abbeyleix hit their fifth, this time it was Wallace who turned provider for midfielder Dean Byrne to tap home from five yards, bringing affairs to an end.