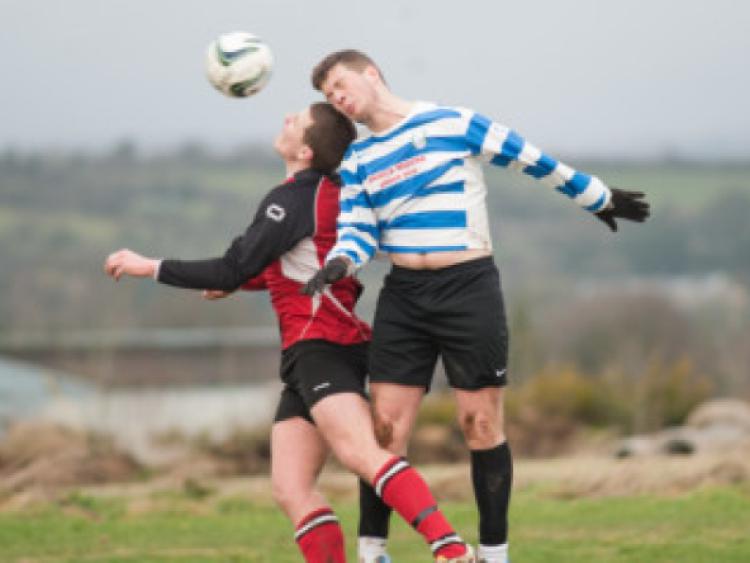 Weather permitting, and that has been a difficult assumption to make in recent weeks, this coming weekend in the CCFL will be dominated by cup action and in particular the prestigious John Farrell Combined Counties Cup.

Weather permitting, and that has been a difficult assumption to make in recent weeks, this coming weekend in the CCFL will be dominated by cup action and in particular the prestigious John Farrell Combined Counties Cup.

Eleven Laois teams remain in contention to become the first team in the county since Mountmellick in 2003 to bring home the iconic silverware.

Another Laois team will make it through to Round 3 this Sunday as Portlaoise and Midlands Celtic face off in local derby in Rossleighan Park. This has all the hallmarks of a possible upset with Midlands Celtic flying high in Division 4A with just two defeats in 11 games while Portlaoise have had their struggles in Division 2 and are just two points out of the relegation places. Midlands Celtic will go in as underdogs but will relish the chance to knock off their more illustrious hosts.

The remaining Laois sides are all in action in Round 3 with another all Laois tie down for decision in The Lawn where Stradbally welcome Portlaoise side Towerhill Rovers. Stradbally have done brilliantly in recent weeks to drag themselves back into the promotion hunt in Division 1 and if they bring that form to this game, they should prove too strong for a good Towerhill side who themselves are in the race for second place in Division 3A.

Premier Division side Clonaslee Utd are another side in good form in the league of late and that should stand them in good stead for a strong cup run. They will need to be on form against a Moate Celtic side who are right in the mix in Division 2 but if they play up to their recent standards, Clonaslee United should find themselves in the draw for the last 16.

Rosenallis have the benefit of home advantage against Longford side Camlin Utd with their game kicking off at 12pm in The Grove to allow their visitors time to make the lengthy trip to the foot of the Slieve Blooms. Rosenallis have struggled in the Premier Division this year and are staring down the barrel of relegation but the pressure is off in the cup and they will be hoping to madvance. Camlin are one of the stronger Longford teams however and Rosenallis will need to show improvement from their league form if they are not to be turned over.

Noreside, who were the only side able to host a game last weekend in the atrocious weather, come into their game with Tullamore with a confidence boosting win over Walsh Island under their belts. It’s a tough ask to expect them to upset Premier Division side Tullamore but the Castletown outfit will have no fear making the trip to Offaly’s largest club.

As already mentioned, Mountmellick were the last Laois team to win the John Farrell Combined Counties Cup and they will be confident of maintaining their interest in this year’s competition when they travel to Westmeath to play Raharney this Sunday. Only a miracle series of results would see Mountmellick dodge the relegation bullet from the Senior Division at this stage but they can still put a positive spin on their season with a good cup run. Currently tied for the lead in Division 2, Raharney will certainly feel they can take out the Laois Senior Division side but Mountmellick, with their experience in the high standards of the top flight, should have too much of their hosts this Sunday