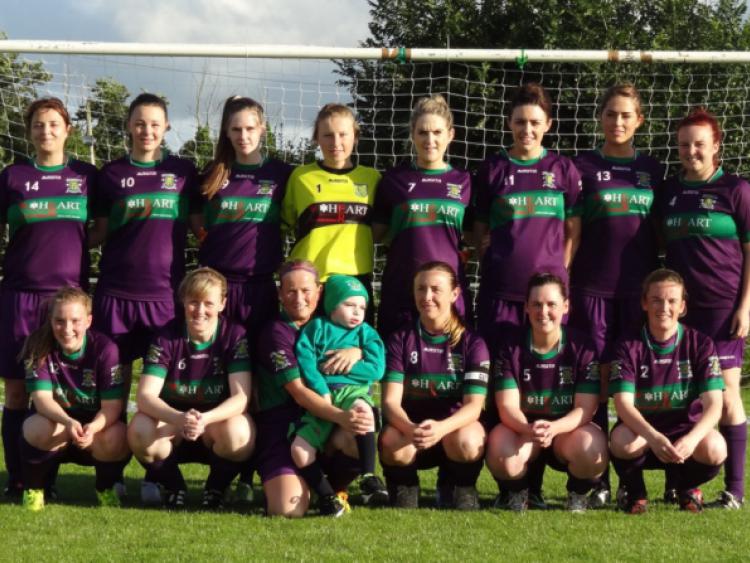 The girls are unbeaten in the league with a fantastic nine wins and one draw from 10 outings. All roads led to the excellently prepared Rossleighan Park grounds in mid August as the Portlaoise Ladies AFC team played their final league game of the season against fellow contenders Castle Villa in what was an enthralling finale to an incredible season for the girls.

Portlaoise, despite being crowned league champions with two games following a win over neighbours Mountmellick Utd, were not distracted and came out in the first half with all guns blazing.

The home side put the pressure on immediately with some impressive approach work. After being put through down the right, Colleen Rickard struck a beautiful ball from the edge of the box, dipping over the keepers head putting the home side up 1-0 after five minutes.

However, Portlaoise didn’t have it all their own way as the Castle Villa side reacted to the first goal by picking up the pace with some promising attacks, however the home side’s solid back line stood firm with some great clearances by Bernie Bowe who swept out any stray ball that passed her under pressure back line.

The second goal was soon to come when another pin-point pass reached Becka Kelly on the right wing and she finished in style with a swift shot hitting the back of the net similar to Rickard’s first goal. Portlaoise kept up their relentless attack with a number of missed chances. A corner kick by Danielle Keane met the head of the visitors centre back which put Portlaoise up 3-0, which they held up until half time.

The start of the second half saw Castle Villa gain a bit of momentum with a chance on goal missed by striker Sarah Kirwan but ‘keeper Natalia Cierpisz stopped it in its tracks. Portlaoise caught Castle Villa on the break when a long pass found Rickard in the forwards who danced her way past the defence with ease, before dinking the ball with the outside of her boot to the corner making it 4-0 for the home side and finishing off what was an exciting and impressive evening of soccer for the Portlaoise Ladies.

Portlaoise are currently still in competition where they will take on Mountmellick Utd away in the Martin Byrne Womens Shield Semi-Final this Wednesday, September 3 at 6pm kick off in Conor Davis Pk, Mountmellick.

Portlaoise Ladies would like to thank their Manager/Coach Bernie Bowe for all her hard work and dedication to the team throughout the season and for making it possible to celebrate promotion as champions, Jack Conroy (Medic), their club Portlaoise AFC, their supporters and main sponsor HEART ER Ambulance Service.