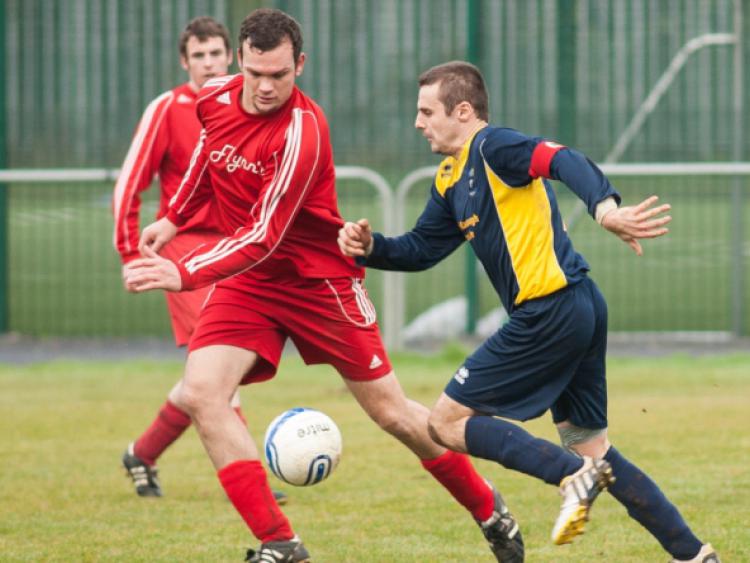 A goal two minutes from time Sean Larkin secured all three points for Clonaslee on Sunday in their temporary home ground in Leah Victoria Park in Tullamore.

A goal two minutes from time Sean Larkin secured all three points for Clonaslee on Sunday in their temporary home ground in Leah Victoria Park in Tullamore.

Abbeyleix had dominated the opening 45 minutes but they couldn’t make the breakthrough depsite creating a host of opportunities. Clonaslee came more into the game on the restart and were marginally the better side in the second 45 minutes.

The game looked to be heading for a draw with neither side able to find the target until two minutes from time when Aaron Culleton cut down the left wing before putting in a tempting low cross that Larkin drilled home at the back post. The result keeps Clonaslee in the battle for a promotion place with seven league games remaining.

That push for promotion looked all set to suffer a setback in the first half as Abbeyleix dominated the game in terms of territory and possession and they did everything but find the back of the net.

On the excellent playing surface, Clonaslee struggled to get any foothold in the game and rarely managed to get any meaningful passages of play.

Abbeyleix’ first chance came after 11 minutes when Niall Wallace was clipped outside the box. His free kicked deflected out off the wall but from the resulting corner the ball broke to Ger Fennelly who fired over from close range.

Midway through the half Dean Byrne found space in front of the Clonaslee goal but his shot was bravely blocked by Conor Gorman. Abbeyleix continued to press forward and after a cross from the excellent Alex Westbrook was headed back across goals by Sean Larkin, Niall Wallace volleyed the ball just over the bar.

The chances kept coming for Abbeyleix and they have the ball in the net before the break but Daniel Coffey was rightly ruled to have been offside when Niall Wallace played the ball through.

Abbeyleix had the first chance of the second half when Alex Westbrook took the ball off Conor Gorman close to the Clonaslee goal but his first time effort curled just wide of the left hand post.

Clonaslee came more into the game and they came close to opening the scoring after 51 minutes when a ball in from Aaron Culleton was flicked goalward by Keith Hogan but Abbeyleix goalkeeper Gary Scully tipped the ball over the bar. Soon after Clonaslee again came close with a shot from John Rigney deflected just over the bar.

Chances were at a premium in the second-half with both sides effectively cancelling each other out in the middle of the field.

Daniel Coffey and Oisin Carroll had half chances for Abbeyleix while Sean Larkin went close for Clonaslee but entering the final five minutes the game was still scorless and seemed all set to finish in a draw.

However with two minutes to go, Clonaslee broke after breaking up an Abbeyleix attack. The ball was played out the left wing to Aaron Culleton who showed great pace late in the game. From the left edge of the Abbeyleix box, he played a super low ball across out of the reach of goalkeeper Gary Scully and Sean Larkin was on hand at the back post to finish from close range.

They almost doubled their lead in injury-time when left back Mark McEvoy found space in the box but his shot was well saved by Gary Scully and the Clonaslee man’s follow up header went just wide.

Soon after the final whistle went with Clonaslee a goal up and Abbeyleix left to rue a raft of missed chances when they were well on top in the first-half.