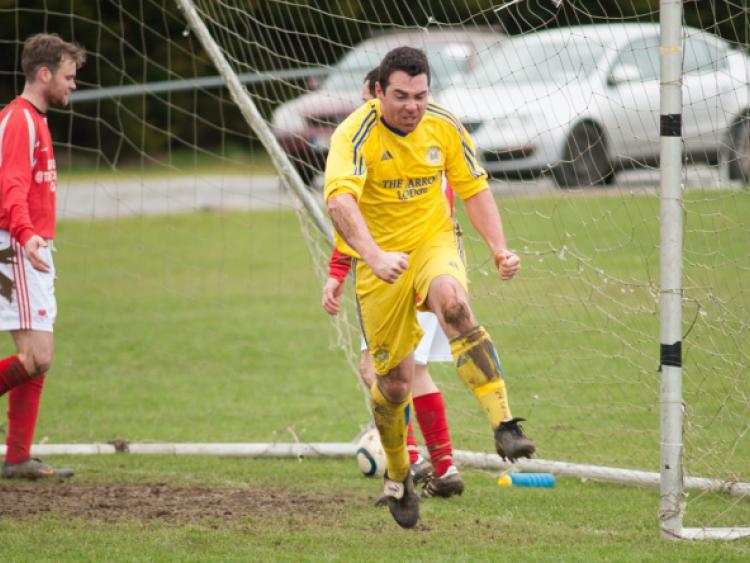 Arlington’s hopes of chasing down Willow Park at the top of the CCFL Senior Division suffered a crushing blow on Sunday afternoon when they suffered a 5-3 away to Clar.

Arlington’s hopes of chasing down Willow Park at the top of the CCFL Senior Division suffered a crushing blow on Sunday afternoon when they suffered a 5-3 away to Clar.

With an hour on the clock in this hugley entertaining game which was an excellent advertisement for the CCFL’s top flight, Arlington were in a strong position to continue their recent good form as they lead 3-1 and were very much in control of proceedings. However in the last half hour, Clara Town made some crucial substitutions and got on top hitting four goals to pull off an unlikely victory.

With leaders Willow Park winning against their Athlone rivals St Peter’s, Arlington are now six points adrift with just four games remaining. While their hopes of becoming the first Laois team to win the Senior Division seem to have gone, they are still in position to claim the runners up spot.

With wingers Olic Shiskarev and Dean Minnock causing problems on the flank, Arlington made the early running with Minnock curling a free kick just wide of the post with his left foot.

With ten minutes on the clock, Arlington looked to have opened up the Clara defence when Olic Shiskarev played Joe Gorman through but Richie Slammon came across to make a crucial interception.

Two minutes later Arlington did make the breakthrough when a cross from Shiskarev found Eoin Gleeson umarked in the area and he made no mistake with a crisp low finish to the bottom right corner of the net.

Clara equalised against the run of play just before the 20 minute mark when a low free kick from the right wing was deftly flicked into the bottom corner of the net by centre-back Pa Smith. Two minutes later Clara came close to taking the lead when the ball broke to Alan Kelly but he shot wide from the edge of the box with the goal at his mercy.

Midway through the half, Arlington retook the lead when James Gallagher headed home a dangerous inswinging corner from John Rickard. Clara had two half chances before the break to level the scores but Sean Moran and Derek Coughlan both shot wide.

Clara almost levelled the scores shortly after the restart with the best move of the game involving Sean Moran, JJ Colshe and the hugely impressive Robert Bracken bu Arlington centre-half Alan Kelly got back just in time to make a crucial tackle.

Playing the game at a relentless pace, Arlington gradually took control of the game and after Olic Shiskarev went close, they moved 3-1 ahead after 54 minutes. Shiskarev and Joe Gorman combined brilliantly down the left before a low cross was forced home from close range by Shaun Pierre Cataro.

Given Arlington’s dominance to this point, it looked as if they had the game in the bag and they had two glorious chances to extend their lead but Eoin Gleeson and John Rickard both shot wide.

While they were in full control at this stage, they dropped their pace in the final quarter allowing Clara back into the game.

To their credit, the home side grasped the opportunity with both hands and they pulled a goal back with 63 minutes on the clock when a cross from Robert Bracken on the by-line was flicked home by JJ Colshe. That goal gave Clara a noticable boost and they came close to equalising soon after when Robert Bracken was played through but his shot was well saved Brain McAuley.

Arlington were struggling to get their passing game going again as Clara dominated possession and launched wave after wave of attack. The equaliser came with 12 minutes to go when Sean Moran reacted quickest to put home the rebound after JJ Colshe’s powerfully struck low free kick came back off the post.

Arlington were now firmly on the back foot as Clara pushed on for the winner and the home side made their pressure count as they took the lead with five minutes to go when JJ Colshe headed home Thomas Deehan’s cross.

With Arlington pushing on looking for an equaliser, Clara added a fifth on the break with Colshe again finding the target to complete his hat-trick four minutes from time.

Arlington pushed forward to try and rescue something from the game with no success. To cap off their disappointing day, James Gallagher picked up a second yellow card in injury-time.