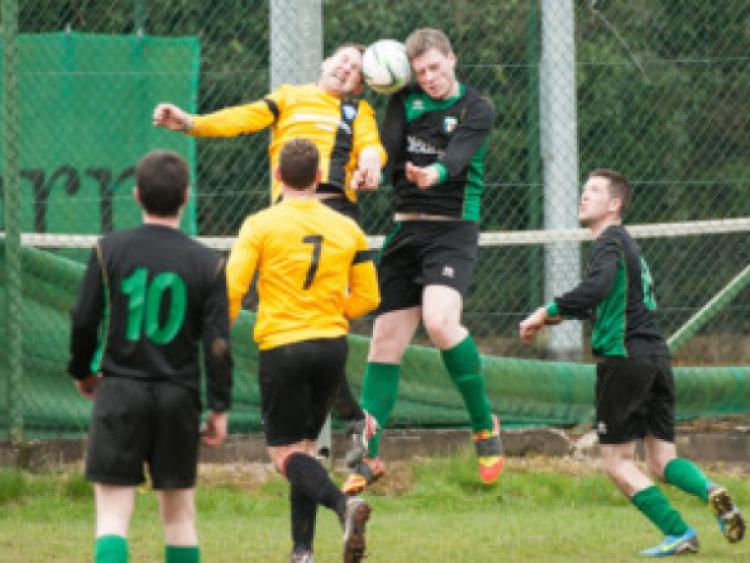 A last minute strike from Portarlington’s Chris Booth was enough to get his side over the line in this close fought encounter in Abbyleix on Sunday morning.

A last minute strike from Portarlington’s Chris Booth was enough to get his side over the line in this close fought encounter in Abbyleix on Sunday morning.

Given Midlands Celtic’s first half dominance, they will be disappointed to have given up a two goal half time lead, but Port’s resilience paid off and they just about shaded it.

Midlands’ number nine Eddie O’Brien was first to threaten with a good strike in the 12th minute, highlighting his side’s early dominance. Port’s first shot in anger came in the 18th minute, Chris Floody trying his luck from twenty yards.

The prison officer’s midfield had the advantage over their Port counterparts and it was a neat move started in the engine room which led to the opener. Cathal Fitzpatrick released Brian Russell down the left hand side. The winger worked his way into the box and Liam Boland’s attempted tackle saw Russell hit the deck. The referee had no hesitation in pointing to the spot and Midlands’ Shane Mitchell did the necessary from twelve yards.

Port’s troubles went from bad to worse when they found themselves two down a minute later. Russell was again involved releasing Podge Langton who’s cross from the end line was meat by a superb acrobatic effort from Eddie O’Brien steering past Keith Kirwan from five yards.

Midlands could have made it three on the half hour when Mitchell shot wide from twenty yards. A long kick-out from Midlands’ Brian McCormack saw Eddie O’Brien release his strike partner Mitchell who pushed wide from inside the box in the 41st minute. Port were lucky to get to the break just two behind.

It was evident from early in the second period that Port certainly weren’t going to lie down and they wrestled dominance from the prison officers in the opening stages. Sub Alan Glass’ cross was just an inch too high for the on-rushing Stephen Terry in the opening stages. Terry was beginning to show his class and was becoming more and more of a threat.

Kirwan pulled off an excellent save in the 56th minute, again it was Mitchell who was thwarted following good interplay with John Feehan. Port’s pressure paid off in the 68th minute. Chris Booth showed excellent vision to find Terry on the left hand side and after working his way into the box, executed the neatest of chips from fifteen yards to reduce his side’s arrears to one.

Buoyed by this, Port now had the bit between their teeth. Chris Floody began to dominate in midfield and was putting his repertoire of passing to good use. The equaliser was inevitable and it came from the penalty spot in the 75th minute. Chris Booth was again the architect weaving into the box only to be hauled down by Midlands’ sub Ben Farrell. Stephen Terry fired home from the spot.

Port smelled blood and with Midlands visible tiring piled on the pressure. As the clock hit ninety minutes, Floody found Booth on the left wing, the tricky number five slalomed his way into the box before beautifully dispatching past McCormack. A superb double save from Kirwan in the 91st minute was enough to see Port to hang on for an absorbing 3-2 win.