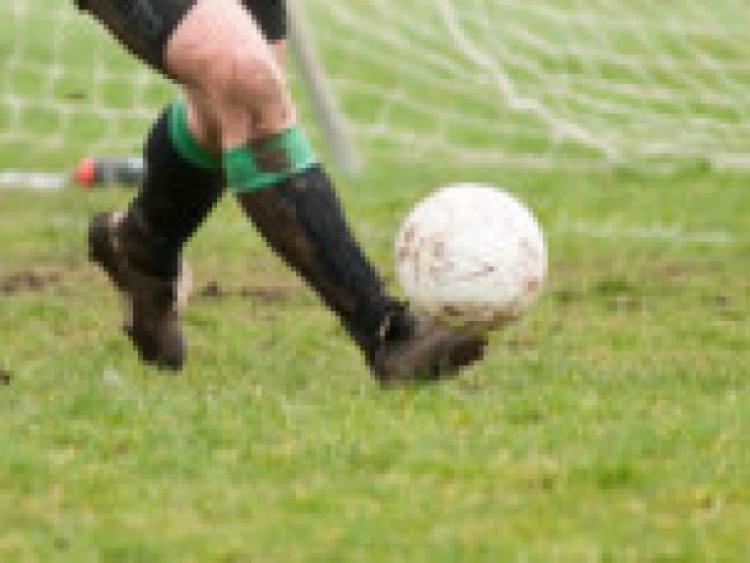 Despite giving up home advantage, Division 2 side Noreside Celtic advanced to the last 16 of the CCFL’s top cup competition with an impressive win over Premier Division side Tullamore Town on Sunday.

Despite giving up home advantage, Division 2 side Noreside Celtic advanced to the last 16 of the CCFL’s top cup competition with an impressive win over Premier Division side Tullamore Town on Sunday.

Having trailed by 1-0 at the break after playing against the strong wind, Noreside scored three times in the second-half through Michael O’Brien, Adrian Dollard and impressive substitute Ben Conroy to secure their place in the last 16.

They were helped by the fact that Tullamore were reduced to ten men before the break when Derek Coolahan was shown a straight red card but Noreside played some excellent football and were deserving of their win.

Playing with the advantage of the wind, Tullamore dominated possession early in the game playing some nice passing football. They had some early efforts but snapshots from Enda Ravenhill and Derek Coolahan were easily saved by Gearoid Lowry.

Noreside came close to breaking the deadlock on the quarter-hour mark when full-back Damien Lalor was put through by Eoin Phelan but his shot was saved by Peter Daly.

Two minutes later however the Laois side found themselves behind when Tullamore broke down the right wing. A perfectly weighted ball from Stephen Duffy put Eddie Keenahan through and his shot from a narrow angle found the back of the net after hitting both posts.

Noreside came close to equalising on the half hour mark but a cross from the right just eluded the outstretched foot of Aaron Moore. The ball was only half cleared and broke to Michael O’Brien but his shot was blocked by Keith O’Connor.

At this stage Noreside were coming more into the game and their cause was further helped when Tullamore’s Derek Coolahan was shown a straight red card after he slid in to block a clearance from Paul Harding. While the Tullamore player’s foot was off the ground and he was not in control of his slide, there seemed to be no intent in the tackle and on another day he may just have received a yellow card for his ill advised challenge.

Despite being a man down, Tullamore almost doubled their lead before the break when a dangerous free from Stephen Duffy was headed clear by Paul Harding. From the resulting corner, Tullamore again threatened but Damien Lanham was on hand to head the ball away.

After the restart, with the wind now at their backs and with a man advantage, Noreside took full control of the game. It tool them nine minutes to get back on level terms when Michael O’Brien tapped the ball into the empty net after Gearoid Gaughan’s initial piledriver had cannoned back off the post.

Midway through the half they took the lead when a cross from Aaron Moore was headed goalward from close range by Tadhg Doran. Tullamore goalkeeper Peter Daly made a tremendous save but Adrian Dollard was on hand to poke the rebound home.

Ben Conroy almost made it three soon after but his near post shot produced another excellent save from Daly in the Tullamore goal although he did not get credit for the stop as a goal-kick was awarded.

Conroy was not to be denied eight minutes later however as he wrapped up the game for Noreside with an excellent individual goal. With Tullamore pushing for an equaliser, Noreside broke quickly and Michael O’Brien played the ball to Conroy on the left wing. Conroy dribbled forward before cutting inside his marker and he kept his composure to slot the ball under Peter Daly to seal the win.

Tullamore threw everything forward in the closing minutes to try and get back into the game but Noreside held on to secure their place in Round 4 of the Combined Counties Cup.