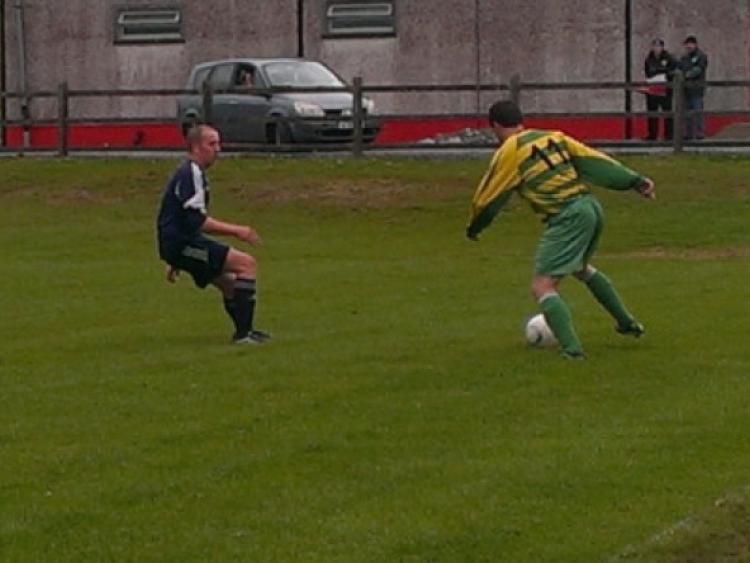 Two goals in five minutes after half-time from Mullingar Athletic proved decisive as Clonaslee Utd lost out after a spirited display in the Billy Hyland Premier Division Cup Final.

Two goals in five minutes after half-time from Mullingar Athletic proved decisive as Clonaslee Utd lost out after a spirited display in the Billy Hyland Premier Division Cup Final.

The Laois side had the majority of chances in the game but they couldn’t find a finish that their efforts deserved on the day.

Playing a 4-4-2 formation, Clonaslee made a solid start to the game and created the first chance after eight minutes when a first time shot from Niall Hogan flashed inches wide of the post.

Mullingar Athletic created their first chance soon after when a long ball forward broke to Paddy Dowdall but his shot was well saved by Sheamus Rosney.

Both sides were creating opportunities and Clonaslee almost broke the deadlock on the break but John Molloy shot over after good work from John Rigney and Niall Hogan.

Only an excellent defensive header from Emmett Brennan denied Clonaslee minutes later when the Mullingar man managed to deflect a dangerous cross from Sean Larkin over the bar.

As the half progressed, Mullingar Athletic began to get the upper hand and they came close when a shot from Jimmy McEntee was well saved by Sheamus Rosney. Mullingar Athletic’s best chance of the half fell to Tye Adamson when he found himself unmarked at the back post but he couldn’t get his header on target as his effort went over the bar.

Just before half-time, Rosney was again called into action as he raced out from his box to hack clear after Paddy Dowdall had broken the Clonaslee Utd off-side trap.

With only a minute of the first 45 minutes remaining, Clonaslee came within a whisker of opening the scoring. They broke from their own box after a corner and a pass from Niall Hogan set Aaron Culleton away on the right wing. He sprinted down the wing before curling a dangerous low cross into the box. John Molloy made up tremendous ground in the middle and managed to get his foot to the ball however at full stretch he couldn’t direct the ball past Noel Croash in the Mullingar Athletic goal.

It remained at 0-0 to the break but the game turned in a five minute spell at the start of the second-half as Mullingar Athletic jumped into a 2-0 lead. The first came less than a minute after the restart as a dangerous, in-swinging free-kick from the left wing was diverted into his own net by Gerard Dunne.

Before Clonaslee had a chance to regain their composure, Keith Hope struck for a second with a pinpoint shot from the edge of the box after the Laois side had failed to clear their lines. They almost struck for a third but Sheamus Rosney did well to deny Hope.

Clonaslee eventually settled back into the game and Darren Hogan came close to scoring but his shot was saved by Croash.

Midway through the half, Clonaslee manager Sean Flynn made a triple substitution and switched to a back three and the changes had the desired effect as they began to get the upper hand in midfield.

With Glen McEvoy taking control in midfield, they continued to create chances but a header from John Molloy was saved by Croash.

Fifteen minutes from time, Clonaslee came within inches of scoring twice but Jimmy McEntee and Stephen McNamee both cleared off the line. They continued to build the pressure with Mark McEvoy, Patrick Whyte and Gerard Dunne both going close.

The Laois side pushed on right to the final minute and were unlucky twice in injury-time not to get on the score-sheet with John Rigney shooting inches wide and Patrick Whyte shooting over the bar.

They will have to put this defeat behind them quickly as the important games keep coming as they face Willow Park in the CCFL Cup quarter-final on Wednesday evening.