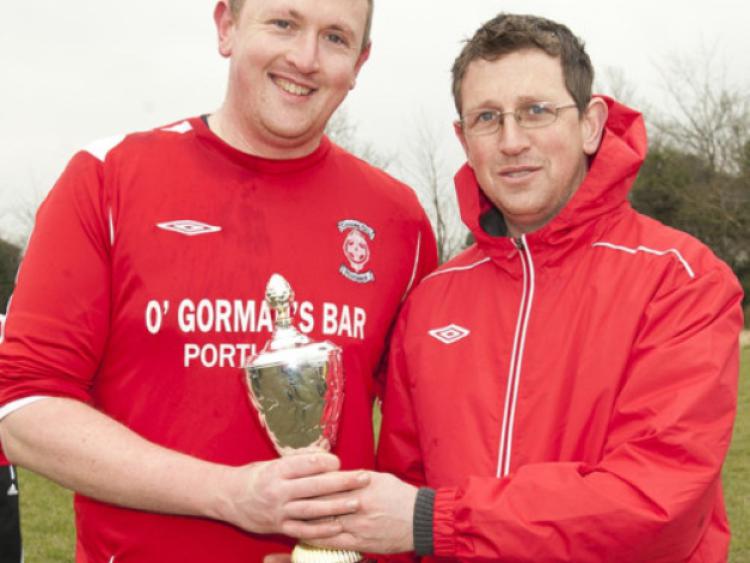 It was a dream day for Portlaoise teams in League action with two league titles secured and another team on the cusp of claiming silverware.

It was a dream day for Portlaoise teams in League action with two league titles secured and another team on the cusp of claiming silverware.

Portlaoise AFC lifted the Division 3A title following a 3-1 win away to Kilcormac, Tower Hill Rovers won the Division 4A title after they comfortably defeated Portarlington Town 6-0 in their final game, and Dynamoe Town put one hand on the Division 2 title with a hard fought 2-1 success over Noreside Celtic in Castletown.

In the Combined Counties Cup the Leagues premier Cup competition there were quarter final wins for Mullingar Athletic also on penalty kicks over St Peter’s, and for C.K United who came from two goals down to defeat Monksland United 3-2 in a pulsating game with Trevor Wright grabbing the winner in injury time. Eddie Keenahan had given the Tullamore men hope when he began the comeback with a well taken goal just before half time.

In the Combined Counties Youths Cup, The Tullamore Under 18’s made it a weekend to remember for the club when they came from two goals down in the dying minutes against Gallen United to force extra time and then went on to win 5-2 in extra time as the Gallen challenge dissipated.

In the other quarter final that was played there was no such excitement as Abbeyleix Athletic easily accounted for Derry Rovers by five goals to one. Tony Flanagan hit two for the Laois men and Dean Byrne, Leigh Bergin and Philip Walton also scored to set up a meeting with Willow Park in what will be a very interesting semi final.

In League action, the excitement is mounting in the battle for ultimate success in Division 1.

Tullamore hold a narrow advantage following a three all draw away to Shinrone in a magnificent game. Shinrone almost won the game with goals from Derek McLoughlin, Philip Murphy, and John Fitzpatrick, but a last minute equaliser keeps Tullamore at the top of the pile and at the same time changed the hosts chances from very good to very slim.

Clonbonny also won their game away to Moate Celtic by two goals to one to keep them well in the hunt, while Clonaslee and Temple Villa who were not in action at the weekend are still also very much in contention.

In Division 3B Ericssons pulled away from the foot of the table with a comprehensive 4-0 win away to Horseleap where goals from John McIntyre, Anthony O’Keefe and a double from Cathal Cranney secured a comfortable victory for the Athlone lads.

In Division 4B St Carthages Athletic warmed up for their big semi final clash with Killoe next weekend with a one nil win over Clara Town’s third team. Carthages captain Ger Conroy scored the only goal of the game on the hour mark after Declan Kelly and Sean Rosney had combined well to create the opening.

Following Edenderry Town’s heroics last weekend, Tullamore’s Under 19’s became the second C.C.F.L team, to make the last four of an outside Cup competition when they defeated Kilkenny side Freshford United by a solitary goal to nil in the quarter final of the Leinster Under 19 Cup. The winning goal came on the hour mark when a Freshford defender deflected the ball into his own net, but in truth the C.C.F.L team were on top for the most part, hitting the crossbar on three occasions and they also had a goal ruled out near the end. This was an excellent all round team performance by Tullamore and they will look forward now to a semi final in a few weeks time.

No such luck however for Willow Park in the Leinster Junior Cup as they bowed out on penalty kicks following a mighty battle with last years FAI finalists and this season’s semi finalists Kilbarrack United. It finished one all after extra time, but the Dublin side edged the shootout 5-4.