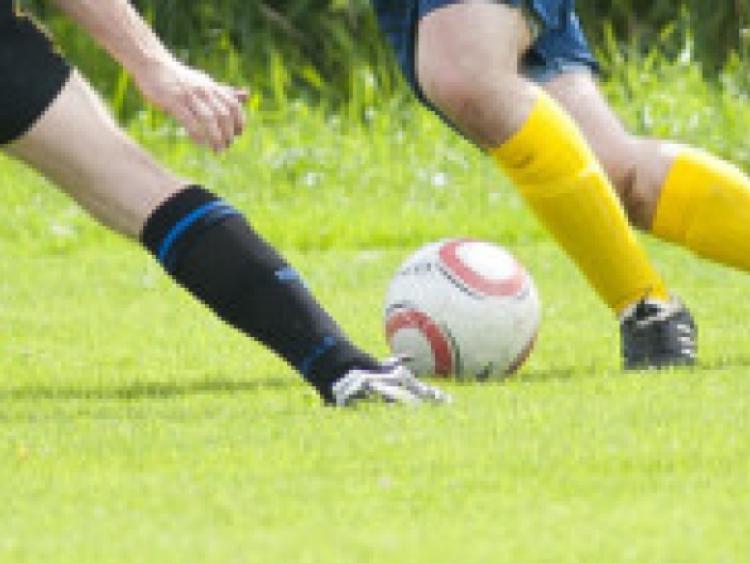 After holding runaway Division 3B leaders scoreless in the first-half of this entertaining game in Kilcormac, Emo Celtic conceded four second-half goals, two from the penalty spot, as they bowed out of the Division 3 Cup.

After holding runaway Division 3B leaders scoreless in the first-half of this entertaining game in Kilcormac, Emo Celtic conceded four second-half goals, two from the penalty spot, as they bowed out of the Division 3 Cup.

The Laois side more than held in their own in the first-half but they were caught cold just a minute after the restart when they conceded from the penalty spot. That goal galvanised the home side and they added a second 12 minutes later before wrapping up the game with 64 minutes on the clock again from the penalty spot. Emo were reduced to 10 men at this stage effectively ending the game as a contest.

After going 4-0 down after 70 minutes, Emo continued to push forward and they were rewarded in the end when Ken Guidon broke the offside trap before calmly slotting past John Deevey.

Emo had the first chance of the game after six minutes when Darren Strong hit a snapshot but it went over the bar.

Kilcormac were hitting Emo on the break and they came close to opening the scoring after ten minutes but after good work down the left, Michael Hannon’s header was well saved by Keith Langford. The Emo goalkeeper was called into action again soon after when he again did well to save from Gary Mahon.

Kilcormac continued to press forward but last ditch tackles from Brian O’Reilly and Mark O’Sullivan kept the game scoreless. Emo were enjoying their own spells of pressure at the other end of the field and a shot from distance from Ken Guinan was just tipped around the post by John Deevey in the Kilcormac goal.

The centre-forward came close again soon after when he latched onto a cross from Brendan O’Reilly but this time his volleyed effort went wide. At the other end Keith Langford was in inspired form palming away a dangerous free-kick from Michael Hannon.

Emo came close to breaking the deadlock before the break but Mark O’Sullivan’s headers was saved by John Deevey.

That left the game scoreless at the break and just seconds after the restart, Emo had their best chance to get in front but Ken Guidon blasted inches wide after being put through on goal.

Less than a minute later, Emo were punished when Kilcormac were awarded a penalty when Gary Mahon was tripped in the box by George Johnson. Centre-half Darren Screeney made his way forward to take the kick and he calmly slotted it into the bottom right corner.

That goal galvanised Kilcormac and they began to show the form that has them ten points clear at the top of Division 3B. After Trevor Screeney and Michael Hannon had both gone close, substitute Steven Screeney added a second with what was his first touch of the game.

The match winning third goal came after 64 minutes, again from the penalty spot, after Brian O’Reilly took down Trevor Screeney as the Kilcormac man was primed to shoot on goal. O’Reilly was shown a second yellow card for the foul and Emo were punished from the spot when Darren Screeney again slotted home.

The fourth came after 70 minutes when Michael Hannon showed some nifty footwork in the box before slotting home. Emo continued to push to the finish and their efforts were rewarded in the closing minutes when Ken Guinan broke the off side trap before slotting past John Deevey.

The final whistle went soon after with Kilcormac through to the third round of the cup and strong favourites to snatch a league and cup double.