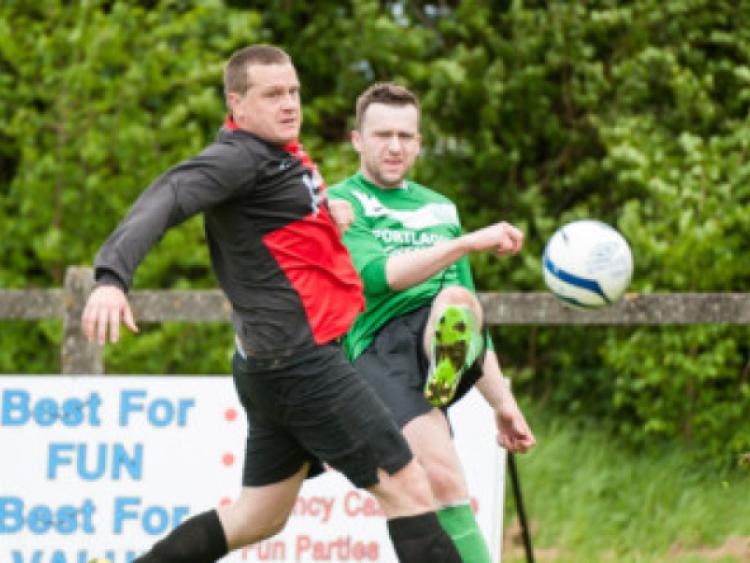 A goal six minutes from time from the penalty spot was enough to secure victory for Portlaoise Shamrocks in the CCFL Shield Final in Portarlington on Sunday.

A goal six minutes from time from the penalty spot was enough to secure victory for Portlaoise Shamrocks in the CCFL Shield Final in Portarlington on Sunday.

The newly crowned Division 4A champions went in as underdogs against the Division 3A champions but when the final whistle went, it was the lower ranked side who came out on top.

Playing against wind in the first-half, Portlaoise Shamrocks created the better of the early chances with Enda Kelly twice going close. Edenderry began to get into the game but Barry Lindon was equal to the challenges that came his way. Both defences were playing well and the game remained scoreless to the interval.

Chances were at a premium in the second-half with neither side carving out a clear cut opportunity. With extra-time looming, a well placed ball put Portlaoise Shamrocks Stephen O’Loughlin throguh and when he tumbled to the ground after a challenge from Brian Quinlan, referee Columba McDermot pointed to the spot. Ronan Molloy stepped up to take the kick and he dispatched it cooly past Quinlan to give his side a precious lead.

Edenderry pushed forward in search of a late equaliser but a torrential downpour made already difficult conditions treacherous and Portlaoise Shamrocks held on to claim their second piece of silverware of the season.