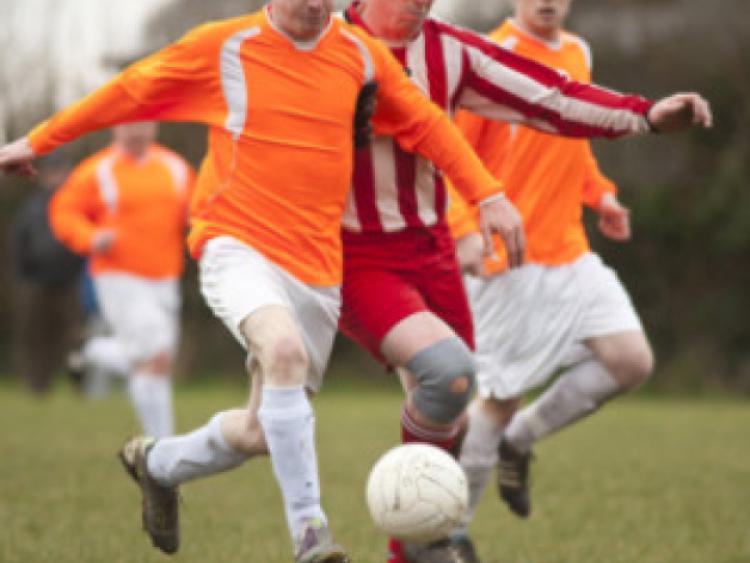 Emo Celtic kept their push for the runners up spot in Division 3A on track with a comfortable win away to Clonminch Rovers on Sunday.

Emo Celtic kept their push for the runners up spot in Division 3A on track with a comfortable win away to Clonminch Rovers on Sunday.

Over the 90 minutes, Emo were much the stronger side and would have won by considerably more had it not been for a string of fine saves from Clonmich goalkeeper John McKeon.

Centre-back Mark O’Sullivan was particularly unlucky not to get on the scoreboard as he had three goalbound headers from set pieces saved by the ‘keeper while another effort went just wide of the post. Paul Lawlor scored twice for Emo on the day but he could have had another three at least were it not for interventions from the Clonmich stopper.

Playing with ten men from the start and with nine men from the 22nd minute, Clonminch struggled to create attacking opportunities but they almost opened the scoring after just 40 seconds when Jay Melia was through on goals but his shot went inches wide of the post.

From that point on however it was all Emo and it was only a matter of when they would finally open their account.

The breakthrough came after 12 minutes when a looping cross from the right wing found Craig Langford unmarked at the back post and he had the simplest of tasks to knock the ball over the line from close range.

Emo continued to press forward and after 22 minutes they had the advantage of having two extra players as Clonminch’s David Gorman was sent off after a clash with Paul Lawlor.

However while they had all the territory and possession, Emo struggled to add a second goal despite having a number of guilt edged chances.

On the half hour mark Paul Lawlor came close but his header was saved by McKeon and two minutes later the same player found himself through on goal but his flick with the outside of his boot was again saved.

Mark O’Sullivan had a powerful header on target after 34 minutes but again he found McKeon in fine form as the ‘keeper made the save.

O’Sullivan came close on two more occasions in the first half with headers from corners but both efforts were saved.

Eventually however McKeon was beaten for a second time just before the interval when Lawlor cut through the Clonminch defence before deftly flicking the ball over the advancing ‘keeper and into the back of the net.

That left it 2-0 at the break and within ten minutes of the restart the lead was four as Emo wrapped up the points. The third goal came after an indirect free-kick was awarded after McKeon was adjudged to have picked up a back pass close to his goal and, after a touch from Paul Dempsey, Paul Lawlor smashed his shot to the back of the net past the massed Clonminch players on the line.

Lawlor turned provider for the fourth as he put Brendan O’Reilly through and the midfielder made no mistake with the finish.

The chances kept coming for Emo but the sting was gone out of the game however there was still plenty of time for further incident as two more players were given their marching orders.

Emo’s Craig Langford was dismissed for dissent and he was joined on the line soon after by Darragh Gorman who also saw red for the same offence.

Emo ended the game with nine men on the field to Clonminch’s eight after Paul Kirwan left the field injured but the match was over as a contest as the visitors cruised to a 4-0 win which keeps them in the hunt for the runners up spot in the division.