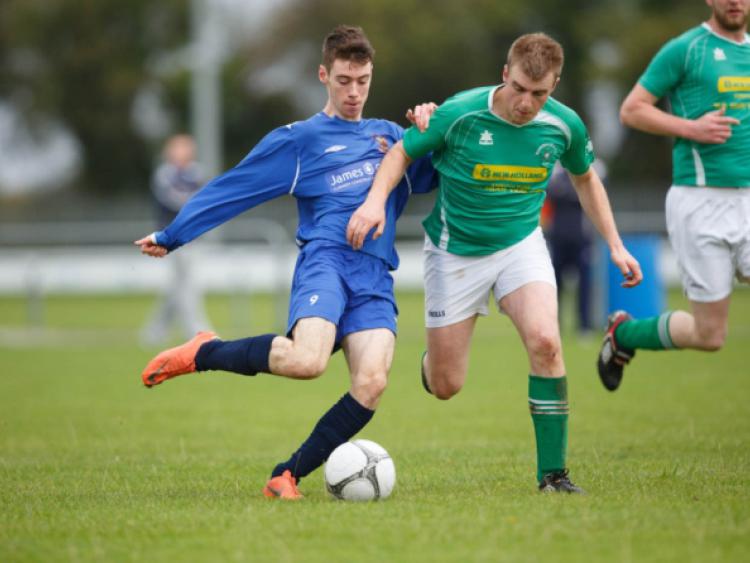 Rosenallis missed the chance to move out of the relegation places in the CCFL Premier Division as they suffered a three goal defeat away to Tullamore on Sunday.

Rosenallis missed the chance to move out of the relegation places in the CCFL Premier Division as they suffered a three goal defeat away to Tullamore on Sunday.

Played in gusty wind and intermittent rain in Leah Victoria Park, Rosenallis found themselves 3-0 down by the break and while they were much improved in the second-half and more than held their own, they couldn’t manage to haul their way back into the game.

Marcus Redmond was excellent for Rosenallis on the day at right back and his runs in the second-half caused constant trouble for Tullamore. Goalkeeper Joseph Walsh, despite conceding five goals, also put in a strong performance with a string of fine saves including one from the penalty spot in the first-half.

Rosenallis had the bare 11 players available and in fact they were forced to start with ten as Patrick Keating was late getting to the game. By the time Keating got on the field, Rosenallis were already a goal behind after a great through ball from Pa Gorman put Eddie Kenehan through on goal and he calmly went past Joseph Walsh before slotting the ball to the back of the net.

Tullamore continued to push forward early in the game and they added a deserved second before the quarter hour with Gorman this time applying the finish.

Rosenallis eventually settled into the game and Darren McEvoy had their first shot in anger after 19 minutes but his snap volley went wide of the target. Conor Dunphy was the next to threaten for Rosenallis but he was also wide of the mark. The Laois side came very close to pulling one back on the half hour mark but Conor Dunphy just put the ball over the bar.

Tullamore continued to threaten at the other end and with 34 minutes on the clock they were awarded a penalty after Eddie Kenehan was hauled down. Pa Gorman stepped up to take the kick but Joseph Walsh got down to his right to make the save with Sean Rosney missing on the rebound.

With Stephen McEvoy marshalling the defence, Rosenallis dealing far better with the threat from Tullamore however they were caught just before the break when Macdaragh O’Neill waltzed through the middle of the defence before slotting the ball past the isolated Joseph Walsh.

That left Tullamore 3-0 up at the break and the lead became four ten minutes after the restart when substitute Derek Coolihan outpaced the Rosenallis defence before putting the ball on a plate for Eddie Kenehan who had the simple task of tapping the ball into the empty net.

Rosenallis continued to battle and after Stephen McEvoy, Donal Lalor and James Jackson all went close, the Laois side eventually got the goal their efforts deserved when Darren McEvoy showed excellent footwork to cut through the Tullamore defence before placing the ball calmly into the back of the net.

Marcus Redmond’s raids up the right flank were creating chances for Rosenallis but they couldn’t manage to add to their goal when they were enjoying the majority of territory and possession.

Eight minutes from time they were caught on the break with Martin Lowry adding Tullamore’s fifth but on the final whistle, Rosenallis’ efforts in the second-half were rewarded when they added a second goal.

A free on the edge of the box deflected into the air off the Tullamore wall but Darren McEvoy showed great determination to head the ball back into the danger area. Stephen McEvoy latched onto the ball but his shot cannoned back into play off the underside of the crossbar however Tony Byrne was on hand to finally put the ball home.