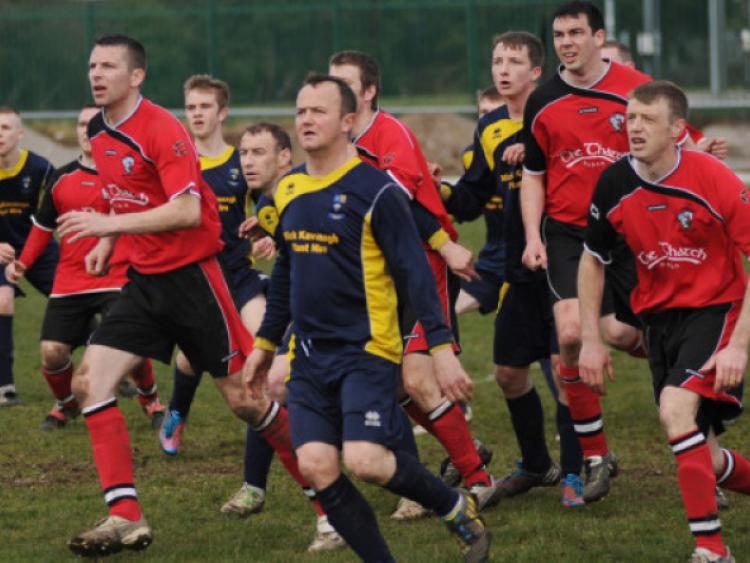 After scoring four minutes into injury-time to force the game to extra-time, Abbeyleix Athletic ultimately suffered the heartbreak of defeat after a penalty shoot-out in the Division 4 Cup Final last Sunday.

After scoring four minutes into injury-time to force the game to extra-time, Abbeyleix Athletic ultimately suffered the heartbreak of defeat after a penalty shoot-out in the Division 4 Cup Final last Sunday.

With the game switched from Rossleighan Park to Conor Davis Park in Mountmellick due to a waterlogged pitch, Abbeyleix found themselves a goal down after six minutes but they never gave up and snatched the equaliser at the death.

That gave them the momentum going into the added periods but after 20 scoreless minutes in extra-time, the game went to the shoot-out. With St Carthage’s leading 4-3, Noel Burke bravely stepped up to take the tenth penalty but his kick was well saved by St Carthage’s ‘keeper Aidan Kinahan.

Abbeyleix also narrowly missed out on the Division 4A title but they are still in the hunt for promotion with one game remaining but they will need to pick themselves up quickly from Sunday’s defeat for that pivotal encounter with Rosenallis.

With a strong wind blowing across the field, Offaly side St Carthage’s made the stronger start and Abbeyleix goalkeeper David Bonham had to on his toes to tip a dipping free from Packie Walsh over the bar.

However St Carthage’s did make the breakthrough soon after when a whipped cross from the right from Walsh was headed to the top corner of the net by veteran striker Willie Clear.

With 25 minutes on the clock St Carthage’s were awarded a generous close range indirect free kick when a sliced clearance was caught by Bonham but the referee deemed it to be a backpass. Former Offaly senior footballer Declan Kelly blasted the ball after it was rolled to him by Sean Rosney but the Abbeyleix defence stood firm.

On the half hour mark Abbeyleix created their first half chance but Dan Mills’ shot was blocked by Leon Looby.

St Carthage’s held their 1-0 lead to the break but after the break with the rain pelting down, Abbeyleix took control and dominated the second 45 minutes.

They were on the front foot with the wind behind them but they struggled to make clear cut opportunities to get themsekves back on level terms.

Midway through the half Abbeyleix really began to pile on the pressure with a series of corners but the physically imposing St Carthage’s defence dealt with the set pieces and looked set to hold on to their lead.

With four minutes to go Abbeyleix came within a whisker of levelling matters but Mark Cahill’s header from a well flighted corner hit the bar.

With time all but up, Abbeyleix were awarded a free kick just outside the area and Daithi Brennan showed great composure and no little skill to curl a left footed shot into the bottom corner.

That forced the game to extra-time and with both teams visibly tiring, chances were at a premium. St Carthage’s had the better opportunities but Anthony Doyle was twice denied by David Bonham.

That sent the game to the lottery of penalties and with the score locked at 2-2 in the shoot-out, St Carthage’s Wes Rosney fired wide to hand the initiative to Abbeyleix. However Dean Byrne couldn’t take advantage for the Laois side as he put his kick over the bar.

That miss let St Carthage’s off the hook and after the next three penalties were scores, it fell to Noel Burke to try and force sudden death but while his shot was on target, it was brilliantly saved by Aidan Kinahan earning the win for his side.