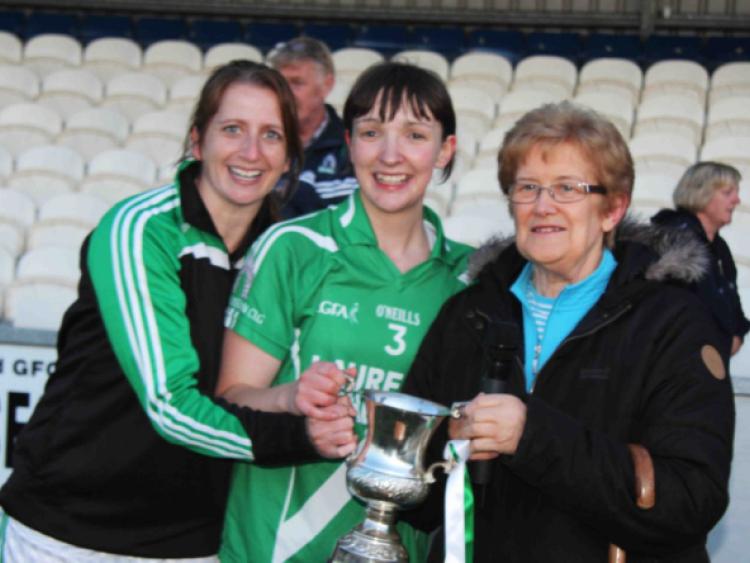 Killeshin made history on Saturday when they claimed their first ever Ladies Junior Football title with two second-half goals sealing an excellent comeback.

Killeshin made history on Saturday when they claimed their first ever Ladies Junior Football title with two second-half goals sealing an excellent comeback.

Killeshin made the better start and seemed to settle into the game well scoring the first two points but they didn’t score again for over half an hour as St Joseph’s built their own two point lead by the break.

Ciara Whelan hit the first two scores for Killeshin but after that it was all St Joseph’s with Claire Hovendon and Jenny Smith levelling matters with a point apiece.

Jenny Smith was on target again soon after and after their confident start, Killeshin were struggling to maintain a foot-hold in the game. Before the interval, Roisin Condron added a fourth point for St Joseph’s who went to the break 0-4 to 0-2 ahead.

Killeshin returned after the restart and looked a far more composed outfit with Mary Claire Kelly finally ending their scoring drought. Jenny Smith responded with her third for St Joseph’s and it became obvious that the game was going to be close to the finish

Ciara Whelan again reduced the gap to one and she soon blasted Killeshin in front from the penalty spot after she was fouled.

The game was settled five minutes later when a free towards the St Joseph’s goal broke kindly for Lauren Brennan and she kept her head to slot the ball home putting Killeshin suddenly into a five point lead.

They had the chances at the other end but all they could produce by way of a response to the two goal salvo was a point from Roisin Condron.

In the closing minutes, Fleming and Lorna Butler exchanged points as Killeshin held on for a remarkable win brought about by the two second-half goals.