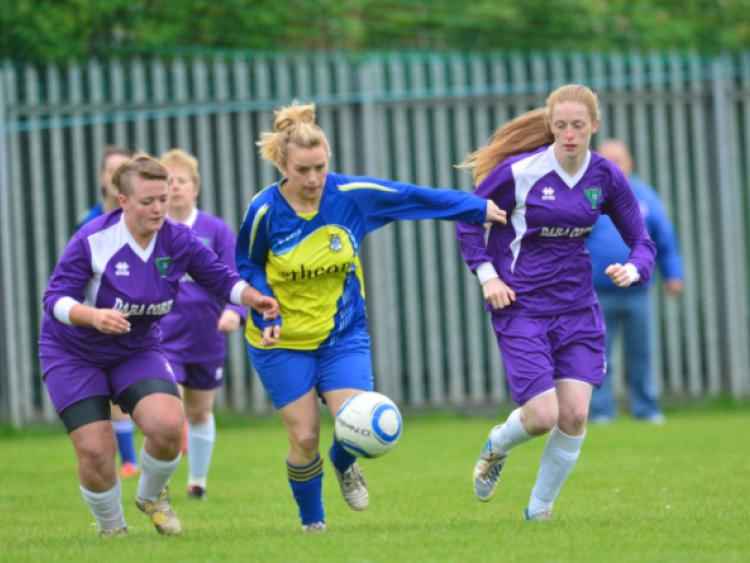 Mountmellick had comfortably won the last meeting but Rathangan arrived for this game determined to give a better account of themselves.

Mountmellick started well and created their first attack after five minutes when Rathangan goalkeeper Linda Gorry made a fine save to deny Susan Lee.

Rathangan came close to breaking the deadlock soon after when Aoife Carey was put through but under pressure from the Mountmellick defence, she shot straight at goalkeeper Jenny Parkinson.

Mountmellick continued to pile on the pressure but their efforts were thwarted for much of the half by a determined rearguard action from Rathangan.

The home side eventually opened the scoring midway through the first half when a rare error by the Rathangan defence allowed Alison Holmes through and she volleyed the ball to the the roof of the net.

The home side did not push on after taking the lead and Rathangan came more into the game.

After creating a number of chances, they eventually got the equaliser they had threatened. After conceding a penalty, Jenny Parkinson in the Mountmellick goal seemed to have made amends when she saved brilliantly from Kelli Dowler but the rebound fell kindly for the Rathangan player who slotted the ball home.

The score remained at 1-1 to the break but it was Mountmellick who came out stronger at the start of the second-half. They created a number of chances but were unable to convert any of them to retake the lead,

Rathangan were always a threat on the break and they came close to snatching an unlikely win but a shot from Aoife Carey went inches wide.