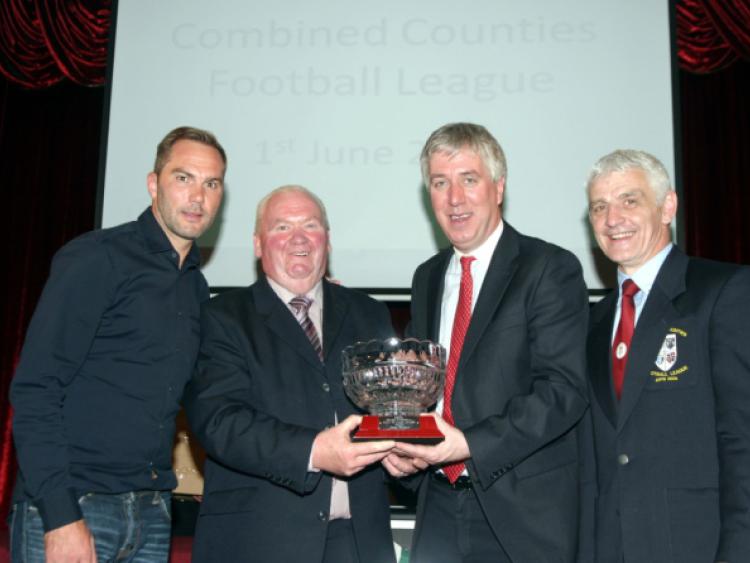 The Combined Counties Football League held their eight annual awards night in the Bridge House Hotel Tullamore in nearly June with over 320 people in attendance for what was another terrific night for football in the Midlands.

The Combined Counties Football League held their eight annual awards night in the Bridge House Hotel Tullamore in nearly June with over 320 people in attendance for what was another terrific night for football in the Midlands.

Special guest for the night former Republic of Ireland international Jason MaCateer arrived early and was available for photographs with all the winning teams. He then warmed up the attendance with an interesting pre dinner questions and answers with Midlands 103’s Dave McArdell, which went down very well with everyone.

League Chairman James Kelly welcomed all the invited guests from the world of football and the league sponsors who he thanked for their support. He also thanked the clubs for their co-operation during the season that many felt was the best yet in the history of the league. He thanked the members of the executive committee for all the hard wokcarried out over the season.

FAI Chief Executive John Delaney was in jovial form during his speech where he made reference to the advancements being made by players and clubs from the league in recent years and highlighted again that the FAI would support clubs in whatever way they possibly could in their efforts to progress.

There were several Laois winners on the night including Portlaoise outfit Dynamo Town who claimed a Division 2 League and Cup double. Portlaoise AFC also won on the double when they took the Division 3A title and the Combined Counties Shield. A third Portlaoise side to be presented on the night were Tower Hill Rovers who received one of the biggest cheers of the night when they collected the Division 4A title. They were also given a real incentive to gain promotion again next season when John Delaney promised them tickets to an Ireland international match in the Aviva Stadium if they succeeded.

A special appreciation award went to the Midlands United Power Wheelchair soccer team who draw their players from Laois Offaly and Westmeath. They have qualified to represent Ireland at the European Power Wheelchair Championships to be held in Paris later this year.

The Hall of Fame Award winner was Jimmy Flanagan of Rosenallis AFC for his efforts over many years both on and off the field that helped establish the Rosenallis Club as a strong force in the Midlands game.