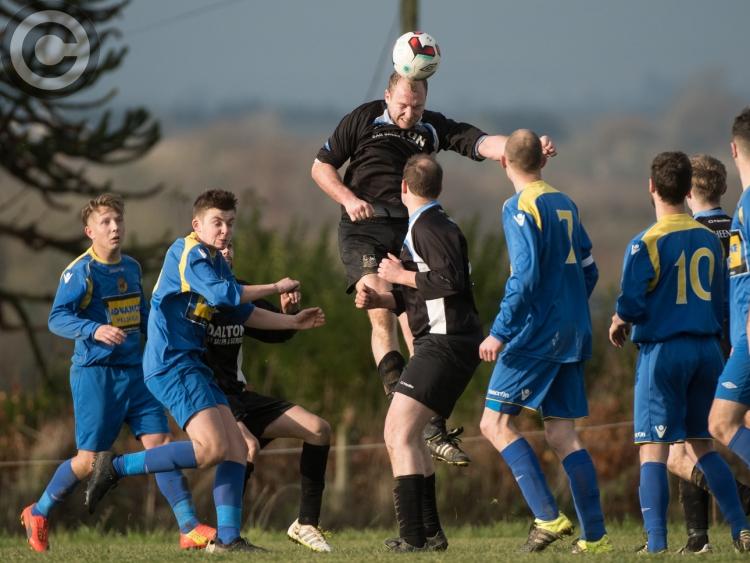 Raheen's Colm Kavanagh gets up to clear this corner ball. Photo Denis Byrne.

A well-deserved win for Raheen FC saw them proceed to the third round of the Paddy Cotter Cup, after eliminating Arlington in Raheen on Sunday morning.
The home side lead by two goals at the interval, but Arlington would set up a shaky finish with a late goal. However, Raheen showed immense character to hold them off and keep their cup dreams alive.
Raheen emerged at the start of the game the sharper of the two teams, with some early pressure resulting in Mikey Dalton having a free header on goal, but a feeble effort resulted in an undemanding save for Arlington keeper David Thorpe. Both teams struggled to find their feet early on, with Raheen marginally edging it in terms of possession.
Arlington came close when Chris Hopkins released a strike, but Joseph Walshe proved to be equal to the job. Raheen’s Mark McDonald tried his luck from quite a distance, but could only manage to fire it straight at the keeper. Shortly after, Mikey Dalton saw his shot fly over the bar for Raheen. Approaching half time, it looked like both side were content with being deadlocked.
However, Raheen’s pressure paid off with two swift goals before the end of the half. Mikey Dalton grabbed the first, after a cross by Conor Dunphy was deflected by Alan Kelly of Arlington, and Dalton was there to prod home. Raheen would follow their first with their second, as some great work by Robbie Moffitt resulted in Conor Dunphy firing in from a distance. David Thorpe spilled the shot, and Raheen were gifted a second.
The second half began where the first left off, with Raheen dominating. Dunphy saw his shot fizz over the bar, followed by a thunderbolt of a strike by Jamie Whelan going just wide of the post. Arlington had a great chance to get back into the game when Oleg Shiskarev went through on goal, but Joseph Walshe held firm to palm it wide.
Arlington started getting closer, as Joseph Walshe was again forced into action, saving Robbie McNeil’s effort. Arlington’s pressure paid off with a goal from Joe Gorman. The striker composed himself to finish well, after a good cross by Sam McMahon. Arlington now had all the momentum, and they had a great chance when Gorman was played through again, but he agonisingly saw his shot rise over the top.
Arlington eagerly searched for the equaliser, but the next goal was to go the way of the home side, against the run of play. Dalton found himself one-on-one with a defender, took him on, gave himself a yard, and directed an impossible shot to save into the bottom left corner of the net.
However, two minutes later Arlington got back into it when Gorman grabbed his second. The striker took it past a defender, and slid the ball past Walshe. Arlington applied the pressure to set it up for an exciting ending, but Raheen FC held on admirably to advance.