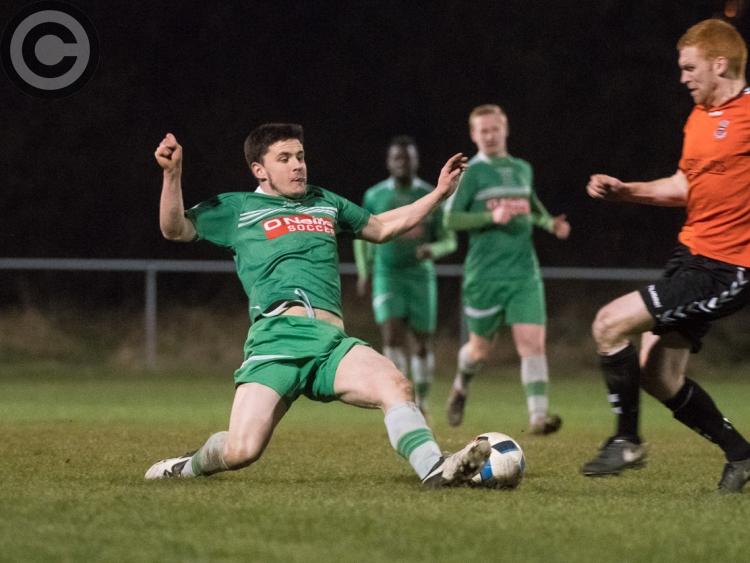 James Mullaney, Portlaoise AFC gets to ball ahead of Inchicore Athletics' Adam Mitchell in their L.S.L game on Friday night. Photo Denis Byrne.

This contest justified a winner, but a combination of exquisite goalkeeping and inferior finishing meant it remained scoreless throughout, with Portlaoise and Inchicore having to make do with a point each.

Despite no goals being scored supporters of both sides were left entertained with what they saw, and the two teams will be preparing themselves for the fight for the league title with ten games left.

The first half failed to be as stimulating as the second, but both teams had a scattering of modest chances, particularly the home side. They had the early oppurtunity, with Martin Staunton heading wide from Jason Murphy’s cross. Inchicore had their first real chance when Derek Roche found himself with acres of space, but his header failed to match Darren Howe’s delivery.

Ten minutes later, and Inchicore had another opportunity from a header. Darren Howe’s header didn’t seem to be causing any problems, but only Mateusz Cwienk’s fingertips prevented it from looping over him.

The biggest chance of the opening half went Portlaoise’s way. Colm Poole was only about ten yards out from goal, but Patrick Reilly produced an incredible save to keep the scores level. The scores would remain like that for the half-time break, as this game looked like it could either way.

Portlaoise would once again have the chance to take the lead five minutes into the second half. Paul Cahillane, who had been notably quiet in the first half, would supply a perfect set-piece to Colm Poole. Unfortunately, the winger mistimed his jump, and another chance went amiss for Portlaoise.

Portlaoise were starting to cause problems for Inchicore with set pieces, as a mixture of excellent deliveries and an unorganised defence would hand Portlaoise opportunities to take the lead. However, heading was an aspect of this game that Portlaoise were poor at, due to them showing the inability to time their jumps.

Cahillane looked to be the one who would most likely give the home side the advantage, and he went close with a vigorous shot inside the box. Inchicore’s keeper, Patrick Reilly, would produce another first-rate save, as he looked to claim the man of the match award.

Both sides would attempt a few long shots, but both were well off the target. It was the last five minutes that gave us the most drama, with Portlaoise looking for a penalty and a golden chance falling to Inchicore’s Nicholas Leech-Byrne.

Jason Murphy looked to have been brought down in the box, but to Portlaoise’s agony, the referee waved play on. Down the other end, substitute Nicholas Leech-Byrne was played through one on one with the keeper, but failed to keep his cool, and the teams would share the spoils.