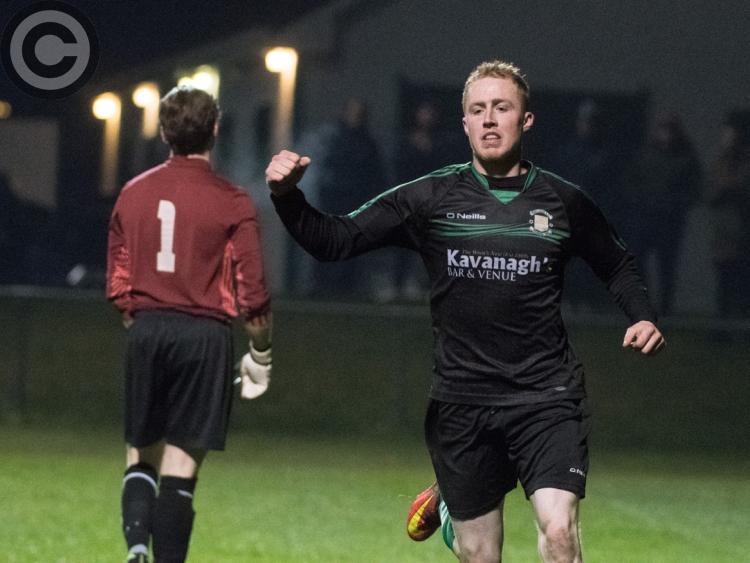 Portlaoise AFC first team travelled to UCD on Sunday morning and despite an under par performance, came away with all three points against a very unlucky Pegasus/St James’ Athletic side.

Portlaoise started with the same side that drew 0-0 with Inchicore last weekend but were made fight all the way to the end in a game of very few chances. The visitors controlled possession for the majority of the game but couldn’t find a way through until the 93rd minute when Aaron Rafter finished from close range, after Jason Murphy was hauled down in the area. Despite claims for a penalty referee Daniel Murphy waved play on while Rafter finished.

Portlaoise started brightly and good played set Paul Cahillane up but his half volley was off target then two long range strikes failed to trouble Mateusz Cwienk. Cahillane and Emmanuel Okpara were involved in good play to set up Jimmy Dermody, his cross was volleyed over by Oisin Fitzpatrick, while at the other end Cwienk did well to save from Seamus King.

Portlaoise’s best chance of the half followed some patient build up and good link play between Okpara and Colm Poole who set up Jason Murphy but he failed to hit the target when through one on one with Stephen Quinlivan.

Just after the restart Cwienk saved another long range effort, while Quinlivan did well to save from Martin Staunton. Cwienk denied Paul Kelly with an excellent close range block on the hour mark then he earned his second clean sheet in a row with another save from distance from Mark Irwan with six minutes to go.

Portlaoise threw everything at Pegasus for the remainder of the game and they were rewarded deep in injury time when Rafter popped up for his sixth goal of the season and a valuable three points in the promotion hunt.

Portlaoise are on the road again next Sunday morning when they travel to play fellow promotion rivals Greenhills/Greenpark in a venue that the hosts have won all games between the sides for the last five seasons.