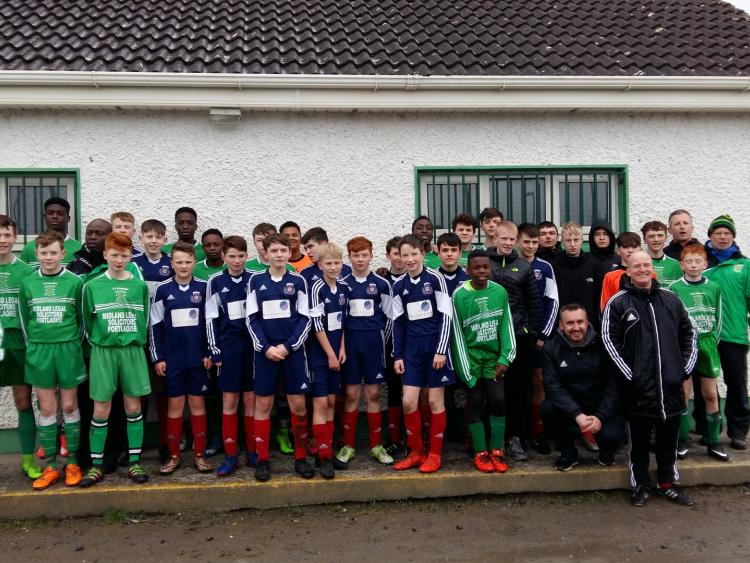 The Portlaoise AFC and Claremont AFC U-15 players.

The Portlaoise U-15 team hosted Claremont AFC from East Kilbride in Scotland on Sunday last.

The club allowed us to play on the 'A' pitch on such a special occasion, which the lads and mentors appreciated. We were expecting a close encounter as they drew with Tullamore the previous day.

We started great and were up after only a few minutes with a well taken goal from Matthew Dempsey. Then Kevin O made it 2-0 soon afterwards. We gave away a penalty but our goal keeper Kian Byrne made a great save.

We played against a strong wind in the first half but Kevin Swayne and Patrick Solecki reached our forwards with well placed passes. Fergus Sheehy and Gavin Skehan ran the wings brilliantly. Eddie Critchley had a very good first half and set up a few good attacking moves.

Daniel Phillips worked good combos with Daniel Adeoye together. Mustafa took on their backs very well and was always a threat. We were up 4-0 by half time thanks to two more goals from Kevin O.

Sydney Prindi guarded the goals in the second half and substitutes Lee Carroll, Tom Cranny and Washi Hamisi were brought on. They all played well and made a good impact to the game. Claremont got their goal on a quick counter attack and was taken very well by their striker.

This was answered by a well placed shot into the bottom corner from 20 yards from Kevin O bringing his tally of goals to four. The final goal from Portlaoise came from a stunning strike from Washi Hamisi who found the top corner from at least 25 yards out. The game ended 6-1 and was a great experience for both teams.

Both teams and supporters retired to the club house for refreshments. Marion Carton very generously sponsored hats with the Portlaoise crest for all the Claremont players. In return the Claremont team presented our players with their club's pennants. It was a very enjoyable day by all involved.