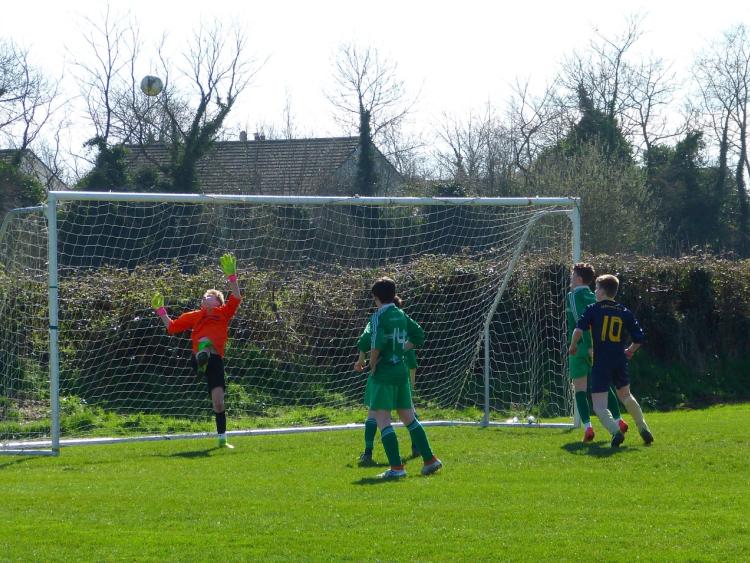 Conor Brown makes a save for Portlaoise against Abbeyleix Athletic

Portlaoise United were delighted to have the full squad back from injury as they looked to keep the pressure on Mullingar for end of season honours.

Nothing less than a win would give them a chance for top spot finish with only rivals Mullingar left to play in the league after this. Perfect conditions made a pleasant change from the last few outings but Abbeyleix were hoping to rain on Portlaoise's parade.

United started positively and won a corner in the first few minutes. Evan Hewitt's corner saw the ball just barely scrambled off line by Abbeyleix after the ball was battered around the box. The clearance off the line was returned back towards the edge of the box and a well taken shot by Ben Doyle was bravely blocked by the Abbeyleix defence. Just towards the end of that phase of play, nice footwork by Ben Doyle allowed him to get another shot away but the confident Abbeyleix keeper saved.

In general there was a good fast start to the game by both sides with the Abbeyleix keeper very strong in claiming the ball as the better chances were falling to the home side. Abbeyleix were getting chances to break and counter attack, but just lacked the killer touch to convert chances into goals.

On 14 minutes Ben McDonald's corner kick almost crept directly into top corner, beating everyone, but it went just wide. Ben then followed up a minute later with great effort from 25 yards that went just over bar.On 17minutes, Portlaoise Utd keeper Conor Brown came out to successfully intercept an attack outside the box with his feet but the ball fell back to let the Abbeyleix attacker get a second go.

The natural instinct of a natural keeper to dive to save the ball saw Conor make a super save but unfortunately he was still outside the box. The referee showed a yellow card and awarded a free kick in a good location. Fortunately the free was dragged well wide of the left post without troubling the goals.

Abbeyleix had a couple of chances but were unable to break through a solid back line of Mattie Kocon, Barry Fitzpatrick, Evan Hewitt and Kanye Tshula. Luke Makim played his best game in Utd colours just in front of the back four doing well to break down play when required.

With 25 minutes on the watch some nice interplay between Luke, Mattie and Dan Ubesie fed Alex Bennett who was unlucky not to beat keeper with a lovely lob.

Abbeyleix resistance was broken down finally on 28 minutes. Lovely play from Kanye at the back cooly taking the ball off the Abbeyleix attacker and passing to Ben Doyle who found Jamie Toman already bearing down on goal. Jamie gave the keeper, who had been excellent, no chance and fired home with a fine finish across the keeper to lower left of the net. 1-0 to the home side.

Two minutes later and it was 2-0. Dan won a penalty after he was pushed over in the box. A great strike by Evan drove the ball into the roof of the net and Evan nearly jumped as high in celebration.

On 35 minutes and the clearest opportunity for Abbeyleix had the ball pinging around United's box, but it was gathered by Conor after a few misses by Utd's defence. The game was 42 minutes old when another chance fell to Ben McDonald just outside the area, but it went just over the bar. In the next few minutes Abbeyleix had two shots on goal saved by Conor Brown who was doing well and minding a healing ankle.

Just after that a fine through ball from Ben Doyle split the defence but Alex and Jamie were unable to capitalise. A good tackle by Cian Bartley Bray found Ben Doyle who ran most of the right wing to cross into danger area but the keeper got there before Alex.

The 49th minute saw Ben McDonald make a super tackle in midfield, who then turned and floated a lovely shot over the keeper but it crashed back off crossbar. However Ben Doyle tried scrambling for the rebound only to see the keeper get on top of it.

TJ Delaney was again proving to be a nuisance for the defence after he came on as a sub and was involved in a lot of the pressure as Utd pushed for another. Dan then forced a super fingertip  save from the Abbeyleix keeper. With three minutes left to play an Abbeyleix free from the left side saw Conor pulling off a nice save to push the ball over the bar. The resulting corner went out of play before reaching the near post.

David Burke made an important tackle on the left to break down a late Abbeyleix attack as both sides still pushed. The end of the game saw the end of Abbeyleix's threat when it became 3-0.

Ben Dwyer fed Ben Doyle on the right who had plenty to do to beat the defender and the keeper rushing out. Ben's shot had to be perfectly timed to get past the onrushing defence and it was a cracking goal from the right side of the box. Full time 3-0.

Great to see Cian Rafter get back on the pitch and get stuck in in the only way he knows after a long lay off and John Ging gaining more experience under his belt. Every one of the Utd team put in a solid effort and the Abbeyleix team just lacked clinical finishing in this match as it was a good fast competitive game from start to finish.

Man of the Match was Ben Doyle who capped off an energetic dynamic display with an exquisite goal that his performance deserved.