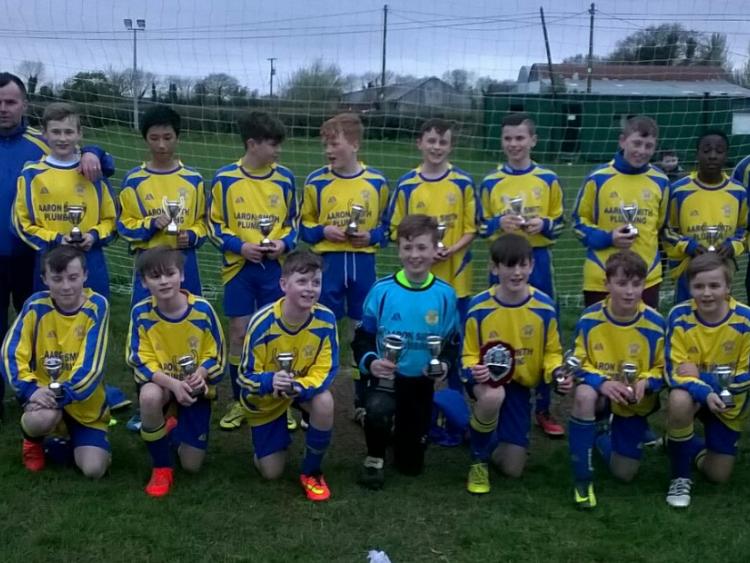 The Arlington U-13 team and coaches.

Arlington AFC U-13s headed to play Kildare Town at their home pitch last Monday night, knowing a draw would be enough for them to be crowned champions of the KDUL Major League.

The team got a nice pre-match surprise as they received their new kit, sponsored by Aaron Smith Plumbing and Heating, before kickoff.

The team had great support at the match as many made the journey out in the hope of seeing an Arlington victory, and making the occasion memorable for the players. If there when any nerves it definitely didn't show as the Arlington team started the game brightly.

The Arlington support didn't have long to wait for their first goal as Lee Phillips put the ball through for David Tallon to race clear and put the ball past the out rushing Kildare keeper, 0-1.

It was soon 0-2 when Ben Kirwan played through John Ikpotokin to finish into the far corner. The third goal came from an excellent corner from Aaron Prendergast and Lee Phillips volleyed into the Kildare net, making it 0-3.

This was difficult for a Kildare team with little to play for and Kildare found themselves further behind. Dylan Kavanagh found John Ikpotokin with an Arlington free kick, and John again made no mistake once again taking his chance, 0-4.

Soon it was John to turn provider as he crossed to the edge of the box for Matthew Finn to fire into the far corner, 0-5. David Tallon then made it six just before half time as he reacted quickly to cut out a goal kick, looked up and hit a fantastic shot into the roof of the Kildare net from 25 yards.

Kildare started the second half in defiant mood and were soon rewarded with a goal of their own. As their forward saw his shot pushed onto the crossbar from a breakaway, it was a great save by Evan Grattan in the Arlington goal, but the Kildare attacker raced in to finish, 1-6.

Kildare were pushing more now but despite multiple substitutions in the Arlington defence they looked assured with Aaron Gildea, Andy Mason, Dylan Kavanagh, Cian Kennedy, Michael Stafford, and Ruan Fleming all playing their part when they came on.

It was Kildare who were caught once again as Matthew Finn then played in John Ikpotokin who made no mistake completing his hat trick, 1-7. Aaron Prendergast then scored a fine goal after he went past several Kildare players into the box and finished low into the net.

Jack Cooper Brereton and Troy Connolly then combined as Jack sent Troy through to finish, 1-9. Arlington were still looking for their 10th goal, and it came once again via Troy Connolly who volleyed in a great cross from John Ikpotokin, 1-10.

This was a great way for Arlington to finish a hard league campaign, and the team know there are tough tests ahead as they move to Kildares top Premier Division, but for now the team are celebrating and concentrating on the remainder of this season as Major League Champions.

Captain and Goalkeeper Evan Grattan thanked the team coaches, his team mates and praised Athy Town who pushed Arlington all the way for the title.