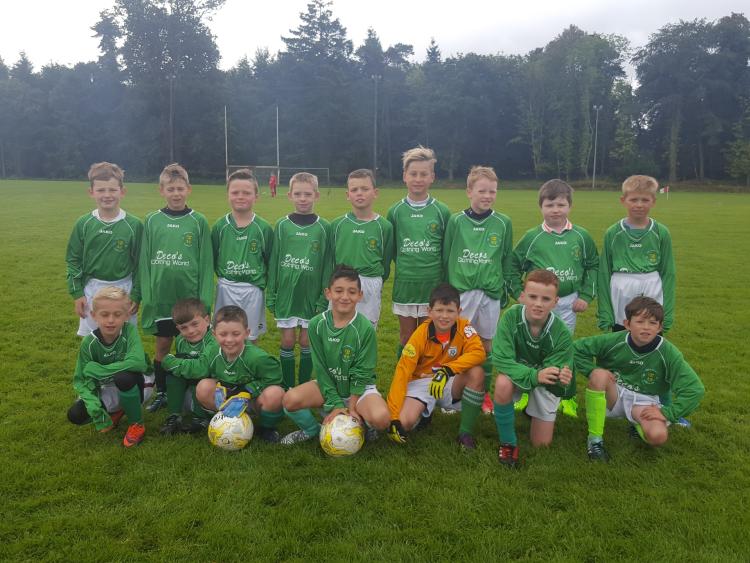 The Portlaoise Athletics U-10 team.

Portlaoise United U-10 team started their league campaign with a short trip to Mountmellick last Saturday morning. There was great excitement amongst the players and coaching staff.

Mountmellick settled first in the game and had a few early chances but great defending by Portlaoise backs kept them out. Mountmellick then scored to go one up. Portlaoise players began to settle down then and were attacking a lot more but unfortunately Mountmellick got a second when an unmarked player behind the defence put away his chance, making it 2-0 at half time.

Mountmellick made it three midway through the second half but Portlaoise never gave up and were unlucky not to score late in the game. Great showing by the team in their first league outing in nine-a-side soccer. Mountmellick however had more expierence as a team and played some very good football. Roll on the next game.

One of Portlaoise AFC's new U-10 teams, Portlaoise Athletic, had their first official outing in club colours at an excellent blitz hosted by Emo FC on Saturday morning.

The 16-strong squad played a total of six matches against opposition from Emo and Mountmellick and came away very satisfied with two wins, two draws and two defeats. It was a very enjoyable first outing for the players, under the management of Darach Kennedy and Ken Peacham, with the benefits of their training sessions over the last few weeks visible for all to see. The team face their first league fixture this coming weekend.