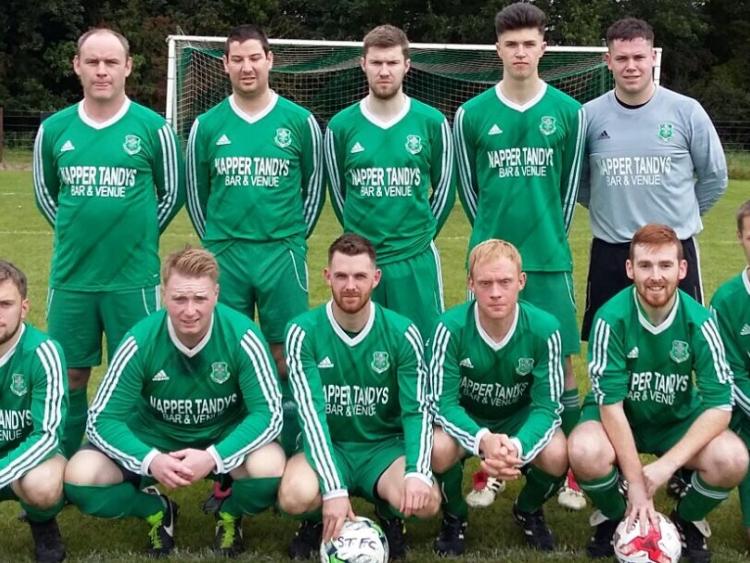 Stradbally maintained their unbeaten start to the season with a good three points against a tough Gallen side Sunday morning.

Stradbally started slowly and it was the Ferbane men who were more comfortable on the ball, causing the home midfield problems, who didn't help themselves giving up some easy possession. However, on seven minutes a swift counter attack from back to front saw Barry Whelan square from the end line for Danny Kelly, who made no mistake from eight yards to the bottom corner.

Gallen were almost level five minutes later when a fine ball through to their centre forward ended with his fine strike rocketing off the crossbar, and it was cleared away by Killian McGannon to safety.

Having survived this scare, Damien Murphy broke down the right for Stradbally, squaring to Kelly again who slid home from six yards, a real poachers goal, which left it 2-0 at the break.

Stradbally's passing game improved in the second half, allowing them to hold onto possession more and create more chances. Substitute Derek Gorman was guilty of squandering an excellent Damien Fitzpatrick cross on 65 minutes. The Offaly side threw threw strikers into attack, but the home defence stood firm with 16 year old Killian McGannon having a fine game in the home defence on his senior team debut.

The points were made safe on 78 minutes when a stray ball was pounced on by Sean Devoy, who unselfishly passed to the returning Derek Gorman who rounded the keeper and slipped the ball home. Indeed Gorman could have had another only for a fine save from the Gallen keeper from close range on 88 minutes.

It was a good three points for the home side in what looks like is going to be a very competitive division. League duty is put to one side next Sunday when Stradbally travel to LSL side Ardmore Rovers in Round 1 of the Leinster Junior Cup, with a 2pm kick-off in Bray.