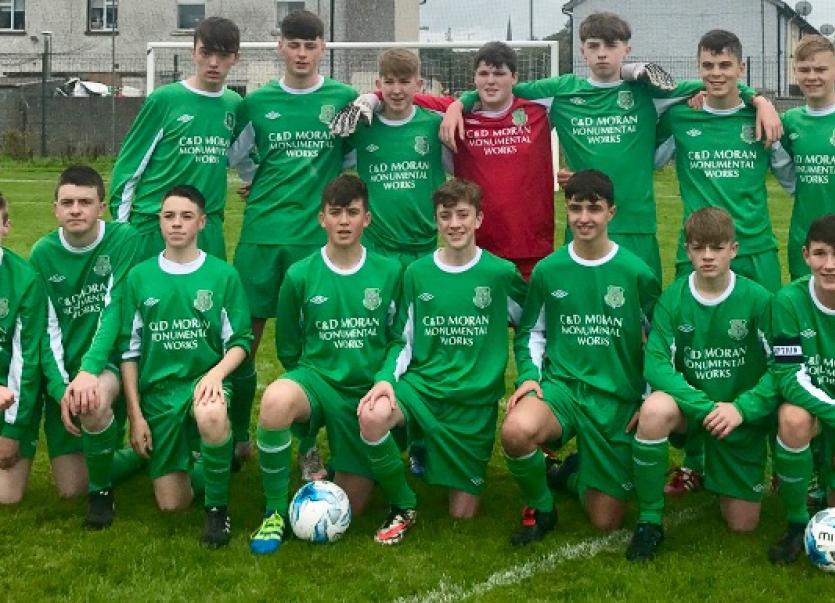 The Stradbally Town U-17 side.

Stradbally U-17s were away to Ballymahon in Longford on Saturday in a game which saw some brilliant football played. The first goal came around the half-hour mark with some excellent footwork and skill from Eamonn Delaney in the Ballymahon box, and an equally sublime finish gave the Stradbally Town boys the lead.

Stradbally where holding strong at the back, with the defence consisting of Peter Conroy, Colm Byrne, Conor Corcoran and Tristan Kelly, however two great saves from William Oxley within five minutes of each other kept Stradbally in the lead.

That was until a Ballymahon free kick was brilliantly put away to the top corner just before the break.

Stradbally where the dominant side coming into the second half and had some great opportunities from the aerial threat of Niall Carey, with substitute Sean Fanning and co. at the back holding tight.

The boys quickly reclaimed the lead with a Jake Ratcliffe goal struck smoothly into the bottom corner after getting on the end of a corner from the right.

Stradbally Town then doubled their lead with a cool finish from Ciarán O'Neill when he was one-on-one with the keeper. And Stradbally hadn't finished scoring with Ciarán O'Neill once again finding the goal from 12 yards after Jake Ratcliffe had beaten the defenders only to be taken down by the goalkeeper, who was subsequently given a yellow card, to give the visitors a 4-1 lead with 20 minutes to play.

However, Ballymahon had not given up and a penalty along with a clinical finish from close range, topped off by a lucky goal from a set piece, completed the comeback, and some great play from the impact subs of David Brennan and Larry Lynch where unable to fashion a winner and Stradbally Town AFC, who where forced to settle for the point.

Eamonn Delaney won Man of the Match from the referee.