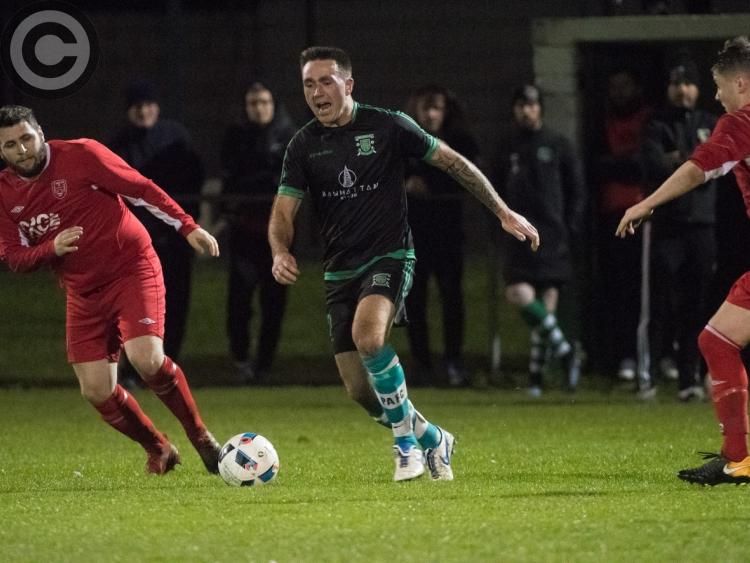 Portlaoise AFC first team finally got their first league win of the season on Sunday afternoon when they beat Templeogue United 4-2.

The home side have started the season well with four wins and two defeats, but were outclassed by a Portlaoise side that finally seem to be getting the confidence back that took them to the league title last season.

Teenager Niall Doran was drafted into the side to replace the suspended Jason Caffrey and was superb throughout, and he scored his first goal for the senior side on 15 minutes when great team play ended with a superb cross from the impressive Oisin Fitzpatrick that Doran headed home.

Moments later it was 2-0 when Doran turned provider with a brilliant back-heel to the attacking James Mullaney, who dribbled past two defenders and side footed home with his left foot past a helpless John-Brian Carthy.

Portlaoise continued to attack and went close on a number of occasions before Templeogue forced a goal from nothing. A long ball that looked harmless wasn’t dealt with by Mateusz Cwienk and Niall Whelan took advantage of the unfortunate error to give his side a lifeline two minutes before the break.

However, Portlaoise took control again after the break and Doran went close to increasing the lead but his stinging half volley was inches over. Jason Murphy went close too but his effort was blocked before Colm Poole tried his luck from distance, but was just off target.

Twenty minutes into the second half Portlaoise went 3-1 up with a brilliant team goal, Colm Coss and Emmanuel Okpara did well and played to Jody Dillon, who drove at the home defence and played wide to Fitzpatrick. He beat two players and cut the ball back to Dillon who fired home from the edge of the area low into the bottom corner.

However, their two-goal cushion was short lived, when Sean Ward found space after a ball into the area wasn’t dealt with and he finished neatly into the corner. Templeogue continued to press and went close on a couple of occasions but Cwienk did well to keep his goal intact.

Portlaoise finally finished the game off with six minutes left when a Colm Poole free kick was met by Dillon for his second of the game and Portlaoise went home with all three points for the first time in six games.

Portlaoise host Inchicore Athletic in Rossleighan Park at 7.30pm on Wednesday evening before they travel to face Broadford Rovers on Sunday afternoon.