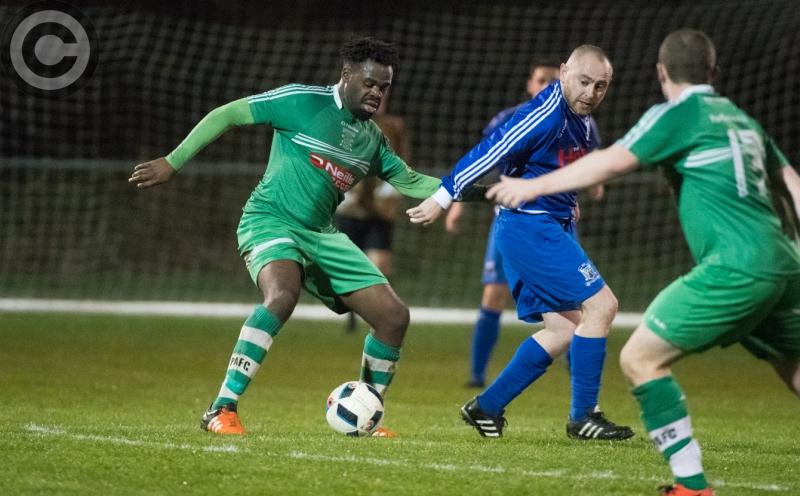 Portlaoise bowed out of the Metropolitan Cup despite a brave effort in Rossleighan Park last Friday.

Ger Dunne’s side went three goals down in very quick succession, but picked themselves up and almost produced a memorable comeback. However, they left it a little too late, and it will be Newbridge Town who will march on.

The first half, surprisingly, remained scoreless, despite both teams having a number of excellent chances. Cody Mulhall of Newbridge had the first of these after sluggish defending by Portlaoise, but he blazed his shot well over the crossbar. Mulhall turned provider from a corner kick, but despite a dangerous delivery, Stephen Best couldn’t get his feet sorted out.

Jody Dillon almost scored a goal out of nothing midway through the half. The striker chased what looked like a hopeless cause, but forced David Sutton to palm his attempt out to safety. Portlaoise looked the more likely to break the deadlock in the first half, with Dillon going close again, before Jason Murphy saw his shot trickle inches wide of the upright.

Portlaoise were awarded a penalty a minute from half-time, as Jason Murphy was pushed down in the box. The same man stepped up to take the penalty he earned, but David Sutton was equal to his effort. Murphy did pounce on the rebound and put the ball in the net, but the referee adjudged him to have fouled Sutton in the process.

A quiet twenty minutes ensued after half-time, before the game sprung to life. Cords Delahunt played an inviting ball into the path of Cody Mulhall, who fired in the game’s first goal for the away side.

Portlaoise had looked arguably the better side until they conceded the first goal, they just failed to take their chances. Newbridge Town, on the other hand, were ruthless with the opportunities they carved out.

It wasn’t long before Newbridge Town grabbed their second goal, as substitute Aji Sule made an instant impact. Mulhall was involved again, delicately laying the ball into the path of Sule, who fired high and hard past a helpless Sean McCormack.

It didn’t stop there though, as Newbridge Town scored their third two minutes later and the game looked well and truly over from a Portlaoise perspective. Mulhall scored his second, playing a part in each of Newbridge Town’s goals. Another substitute, Kenneth Carr, played a through ball into the path of Mulhall, who saw his shot go in off the post.

Portlaoise looked dead and buried at this stage, but the introduction of Shane Collins, Evan McEvoy and James Mullaney sparked a new enthusiasm in Portlaoise. With five minutes to go, James Mullaney’s cross ended up in the back of David Sutton’s net.

Mullaney, who usually plays as part of a back three for Portlaoise, managed to grab a second as we entered stoppage time, as Newbridge Town’s defending was at question here. Despite a few chances right at the end though, Portlaoise couldn’t find an equaliser.