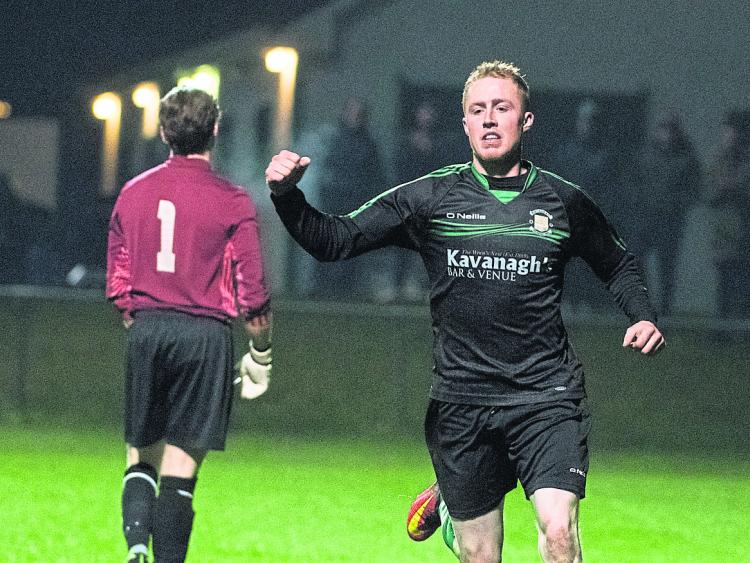 Jason Murphy scored the Portlaoise goal from the penalty spot.

Portlaoise AFC slipped to a two goal defeat in the LSL Division 1A on Friday night, as they lost out to Sacred Heart-Killinarden away from home.

Portlaoise started off brightly with some good play from Jody Dillon and Jason Murphy. In the tenth minute the first chance fell to Jason Murphy, whose shot was deflected out for a corner.

From the resulting corner, Colm Poole's delivery fell to Mark Dunne who blazed over from 12 yards. Five minutes later Porlaoise fell behind against the run of play when Brian Ging was dispossessed in midfield, and a ball down the left flank allowed the home team's striker to cut inside Mark Dunne to score.

Portlaoise were on the front foot again with Jody Dillon, Jay Caffrey, Jay Murphy, and Colm Poole causing lots of problems to the home team. A good interchange from Poole and Dillon, allowed the latter in on goal, but his shot hit the crossbar and went over.

The home team again scored against the run of play when a ball played in from the left side to the box allowed their striker three touches before hitting a great shot into the right side of the Portlaoise net.

Portlaoise upped their game early in the second half with clear chances falling to Jay Caffery, Jay Murphy and Colm Poole but they did not hit the target. Portlaoise grew more frustrated with decisions from the referee and linesman where two off side decisions were given when Jason Murphy and Jody Dillon were clearly onside when going through on goals.

Jason Murphy was then taken down inside the area, and the referee and linesman deemed this not to be a penalty. A poor clearance from Eoin Whyte allowed the home team a fortuitous goal against the run of play.

Portlaoise again pressurised the home goal with Jody Dillon again hitting the bar and substitute Niall Doran hitting the side netting. Jason Caffery was then taken down in the box and Jason Murphy converted. With 70% of possession and plenty of chances Portlaoise will wonder how they lost this game. Portlaoise travel to play St John Bosco FC on Wednesday night.