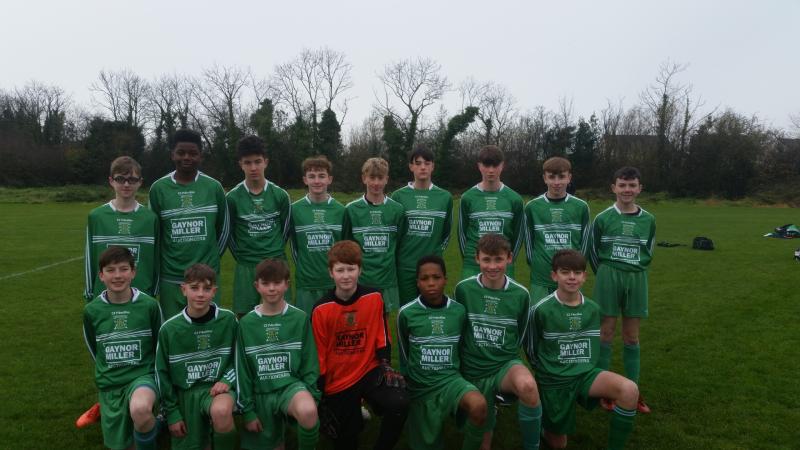 The Portlaoise U-15 team which qualified for the last 32 of the SFAI Cup.

Portlaoise AFC welcomed Kildare Town for this eagerly awaited 4th round National Cup tie at a damp Rossleighan. Kildare who had defeated Portlaoise in a pre-season friendly had to play without three of their regulars while their keeper was carrying a foot injury.

Portlaoise dominated territorially from the outset. A low-struck Darragh Kelly free kick which was well parried by the keeper in the damp conditions set the tenor for the afternoon. An excellent Jason Horan crossed was expertly headed clear by the Kildare centre half with Ben Dempsey ready to pounce.

Kildare were defending bravely against the torrent of Portlaoise forays until a neat Darragh Kelly pass was picked up by Brian Smith who swivelled and struck a low hard shot from 25 meters which deceived the keeper to give Portlaoise the lead after 15 minutes of play. Kildare tried hard to go on the offensive but were snuffed out time and time by the excellent anticipation of Kyle Enright at centre half along with his right full Jamie Preston.

Kildares best chance was when their striker headed wide at the back post from a well delivered free out near the far corner flag. Immediately after this Conall Rowney was well placed to grasp a long range Kildare free that took a touch off one of his own defenders.

A feature of the early exchanges was Josh Hogans aerial prowess in the middle of the park allied to the strong tackling of his midfield partner David Olubowale.

The Kildare defence did very well to withstand several Portlaoise attempts on goal by Brian Smith, Ben Dempsey and Josh. Josh Hogan was judged to be offside when he got on the end of an exquisite chip pass from Brian Smith. A wonderful raking cross by Kyle Enright fell between the keeper and Brian Smith.

Thankfully for Kildare the keeper reacted first to the breaking ball. A lovely cut back from Jamie Preston saw Kildare’s centre half Katie thwart Jason Horan and Brian Smith in quick succession.

Portlaoise finally had their reward nine minutes before the break when Michael Culliton beat his man and cut back a beautiful low cross to Jason Horan who trapped the ball before expertly placing it inside the far post to make it 2-0.

Jason Horan then broke on the left wing and found Ben Dempsey on the right wing with a fabulous diagonal cross, Ben had his well placed shot expertly foot blocked by the advancing keeper. David Olubowale won yet another tackle in midfield and passed forward to Daryl Ntumba who struck a screamer to the roof of the net from 25 meters out to make it three for Portlaoise.

Two minutes later Michael Culliton crossed splendidly for Ben Dempsey who was most unlucky not to make the connection with his head after a well timed run into the box. Ben Dempsey made it 4-0 at the break when he pounced on a goal line clearance from a Daryl Ntumba close in free from 14 meters out.

The Kildare number eight shot wide of the left post on the resumption. A great move involving Daire McDonald and Daryl resulted in Josh Hogan’s well placed shot coming back off the post only for Brian Smith to nonchalantly finish.

The sixth came from an excellent piece of ball control by Luke Dunne O’Connor before passing neatly to Jason Horan who calmly slotted his brace under the advancing keeper. Cillian Friel made it seven with a great finish from a Darragh Kelly cross after the spade work was done by James Wheeler.

The scoring was completed following a move involving Daire McDonald, Samuel Emmanuel and Jason Horan whose hat-trick attempt was foiled only for the on running Tiernan Cahill to finish the rebound to the Kildare net.