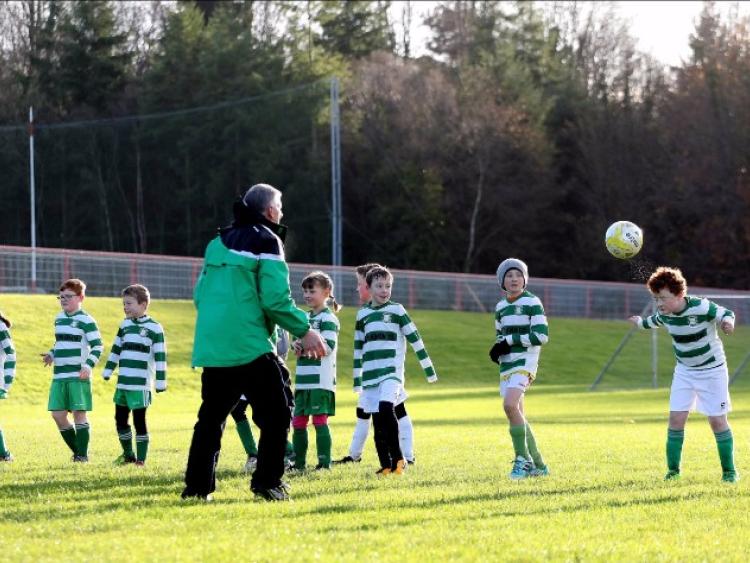 The Portlaoise U-10s warming up before their game with Emo Celtic.

Two of the Portlaoise AFC U-10 teams were in action over the weekend, with one team earning a draw against a strong Emo-Celtic team, while the other recorded a good win over T&S Athletic.

Portlaoise can count themselves lucky to come away from Emo with a point on a cold but dry Saturday morning last.

The hosts started the game on the front foot and had Portlaoise in all sorts of bother early on. Portlaoise struggled to find their rhythm but battled away as best they could to contain the home side.

But for the safe hands of Tom Coleman in the Portlaoise goal Emo would have had the game won in the first half. Rhys Lawless, Dennis Brown and Ross Dunne were under pressure at the back as Emo tried in vain to get the breakthrough goal. They hit the post twice in the first half as Portlaoise luckily held out.

Charlie Dwyer, Holly Murphy and Leah Brennan worked hard to gain possession for Portlaoise but Emo kept the pressure on. Up front Danny Gavin and Rocco Reilly got very little ball in the first half, in fact the Emo keeper had no saves to make in the first period.

Portlaoise Utd, as always, rotate their players so everyone gets plenty of game time, and the second half started with Dennis Browne in goals. Ryan Keane, Conor Dunne, Harry Browne and Gary Brennan all played a big part as Portlaoise were now beginning to find their team mates with neat passing.

Emo to their credit kept attacking looking for the opening goal it finally came ten minutes into the second half. Dennis Browne in goal got his hand to the shot with a good save but couldn't keep it out.

After the goal Portlaoise came storming back and played their best football with some great passing and moving on and off the ball. They got their reward when.Charlie Dwyer found Rocco Reilly with a fine ball and Rocco turned two players and shot low to the corner of the net to make it 1-1.

Emo never gave up and but for great tackling by Harry Browne, Rhys Lawless and Danny Gavin they would have added to their tally. Emo will wonder how they did not win this game while Portlaoise to their credit hung in there and were happy to get a draw in the end.

Credit must be given to referee Martin Kelly who handled the game so well also.

Portlaoise Athletic and T&S Athletic played out a very entertaining game at the Leisure Centre on Saturday.

There was no shortage of skill, determination and team spirit on either side, but the Portlaoise boys proved to be that bit stronger on the day. Sean Conka led the charge, bagging a hat-trick in the process, the pick of which was a fine left footed finish which gave the home team a comfortable half time lead.

Cian Fitzpatrick grabbed a well deserved goal also before Jan Gdowski powered home a header from a Jack Phelan corner. Ethan Kelly showed his versatility with a well taken strike, before Phelan turned on the style with three goals in the final ten minutes.

To their credit, the T&S boys and girls never gave up and showed plenty of talent and ability in all areas of the pitch. The Portlaoise coaches will have been particularly pleased with the team work and passing on display, as they put back-to-back wins together for the first time this season.