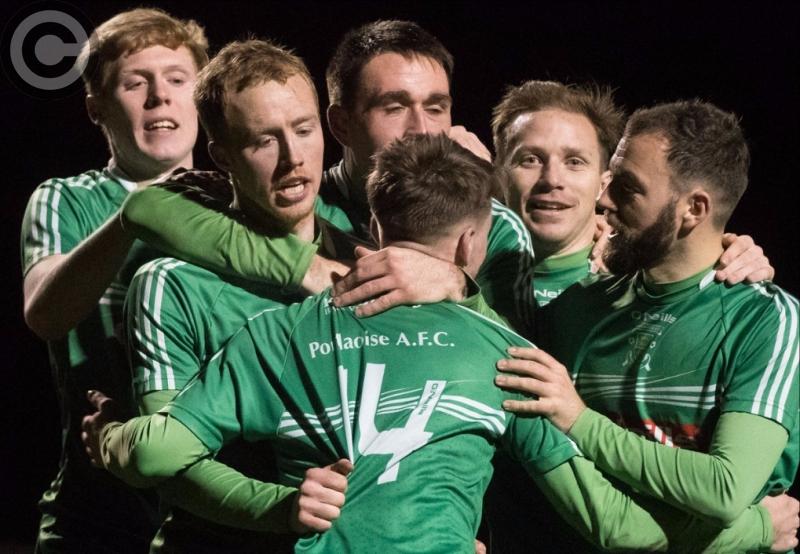 After a shaky start to the season, Portlaoise have rediscovered their form in the last few weeks, and picked up another three points at home to Inchicore Athletic on Friday night.

They now lie in sixth place, seven points off third placed Maynooth University Town. Portlaoise were always in control of this one, as Jody Dillon should’ve scored just four minutes into the match after an inviting delivery from Shane Collins, but the striker’s header was too powerful and went well over. However, it wasn’t long after that when Dillon did get his goal.

James Mullaney made a surge from centre back, playing a quick one-two with Jason Murphy, before cutting inside and releasing a shot. Patrick O’Reilly in goals could only parry as far as Dillon, who tapped in Portlaoise’s first goal.

In truth, the defending from Inchicore Athletic wasn’t great, as no defender got close to either Mullaney or Dillon’s shots.

Dillon had another opportunity when Jason Murphy played him through on goal, but his finish was poor and went wide of Patrick O’Reilly’s post this time. Murphy also squandered a good chance before the half closed, and there was fear of this being another one of Portlaoise’s nights where missed chances would come back to haunt them.

Murphy had another chance just after the break, as Paul Cahillane placed a free kick towards the back post, where Murphy should’ve put his header on target.

However, Portlaoise did grab the all important second goal as we approached the hour mark. James Mullaney was involved again, as he played a long ball that reached the feet of Murphy, who struck the post, but Jason Caffrey was the there with another rebounded goal, and Portlaoise had a two-goal cushion.

Inchicore Athletic started to grow into the game for a stage in the second half, but any hope of a comeback was finished when midfielder Darren Howe received a straight red card for a late challenge on Paul Cahillane.

Dillon went in search of his second goal for Portlaoise, but blazed a chance from inside the box well over as full time approached. Substitute Aaron Rafter had the last chance of the game, but his chipped attempt also went over.