Portlaoise AFC continue charge up the table with win over Templeogue 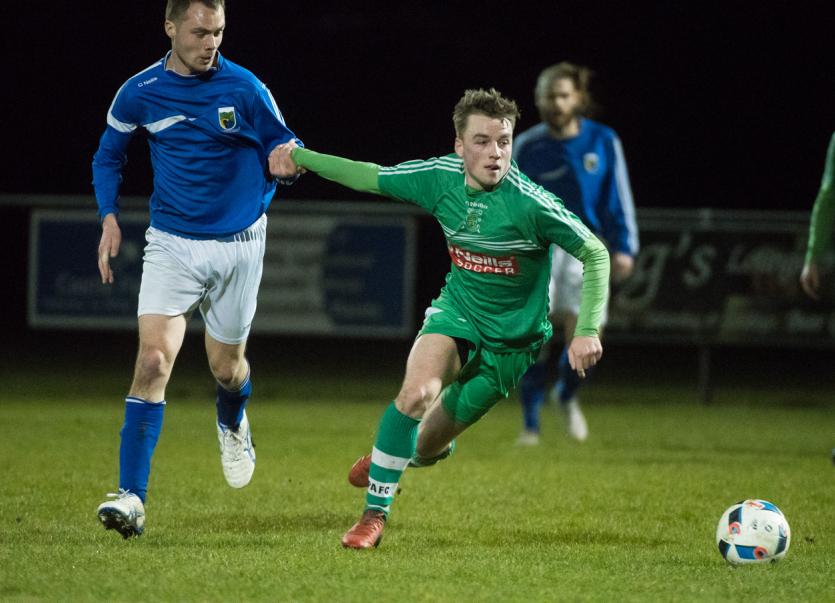 Jason Caffrey, Portlaoise A.F.C is onto this ball in their L.S.L encounter with Templeogue Utd. Photo Denis Byrne

With fourth-placed Templeogue United sitting six points in front of Portlaoise before the pair clashed, this was a pivotal game in deciding whether Portlaoise could make the ground up on those above them.

The win was made even more impressive when you factor in the key players they were missing, with Jody Dillon, Paul Cahillane and Colm Coss all out, and the latter two out for the season due to inter-county football commitments.

Templeogue United started the game on the front foot, with a Sean Ward curler coming back off the post after a poor clearance from Eoghan White. Jason Caffrey delivered a few inviting set pieces for the home side, but Portlaoise failed to capitalise on them.

Eoghan White made up for his earlier error when he put in a heroic last-ditch tackle to deny striker Niall Whelan. However, the pressure was growing on Portlaoise’s back five.

Portlaoise’s Aaron Rafter created a chance for himself when he turned and shot, but the strike never troubled Daire Hancock in goals. Portlaoise began to come into the game a little more now, and Shane Collins’s attempted cross nearly ended up in the back of the net after assistance from a strong wind, but Hancock got fingertips to it.

Portlaoise were awarded a penalty thirty-two minutes in after Aaron Rafter was brought down by Stephen Stokes. Up stepped Jason Murphy, who had a quiet game by his standards, but struck low past Hancock to give Portlaoise the lead.

They made it two-nil not long after, as Jason Caffrey finally got his reward, with his set piece curling delivery ending up in the back of the net. Colm Poole might have got a slight glance on the ball with his head, but Caffrey’s name went down on the score sheet.

Templeogue United were awarded a fantastic opportunity to get one back at the start of the second half when Conor Maguire was alleged to have been brought down by Mark Brennan, similar to the penalty incident that went Portlaoise’s way. Maguire won the penalty, but couldn’t score it, as Mateusz Cwienk read his intentions and saved.

Templeogue United continued to dominate possession for the rest of the half, but struggled to carve out any openings through a packed Portlaoise defence. Niall Whelan managed to go past Oisin Fitzpatrick inside the area, but his shot was brilliantly saved by Cwienk, who looked unbeatable.

Portlaoise had a number of chances to catch the opposition out on the counter-attack, but they were wasteful with the ball, making the wrong decisions.

Templeogue United’s Evan Rodgers tried to catch Cwienk out from afar, but the Portlaoise goalkeeper made sure that he kept a clean sheet, getting down low to smother the shot. Caffrey had a chance to round off the scoring near the end, but he fired over. However, it was a good day at the office for Ger Dunne’s charges, as they kept pace and made ground up on the teams above them.