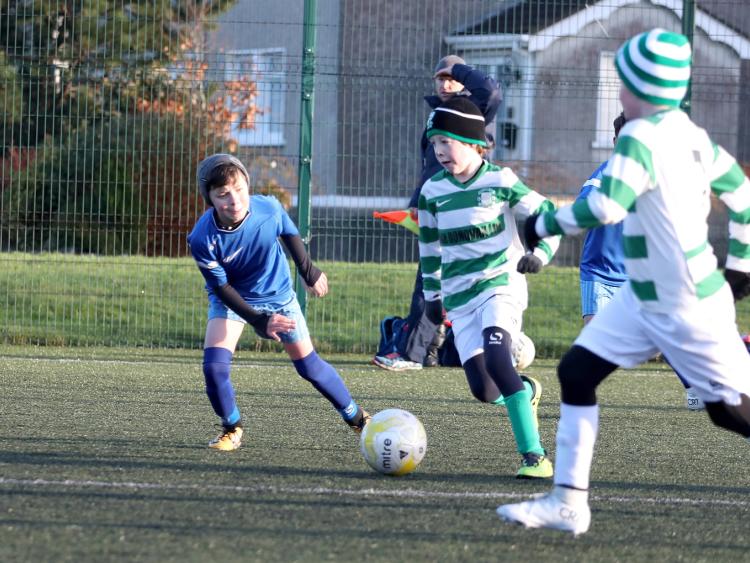 It was a tough loss for Portlaoise U-10s over the weekend.

Three goals in five first-half minutes proved to be the difference between Portlaoise Town and Walsh Island last Saturday in the Midland Schoolboy League.

Both teams had been flying high of late and despite the tough conditions served up an excellent game of football.

Portlaoise started the stronger of the two teams and applied a lot of early pressure with Ben Langford, Cormac Harney, Mark O’Connor and Jack Cleland pushing the team forward. In defence, David Valainis, Sean Powders and Brian Mullins were secure and driving the team forward at every opportunity. Despite this pressure the breakthrough goal wouldn’t come with the home side defending in numbers and scrambling the ball clear on a number of occasions.

On 15 minutes, the home side opened the scoring when a deflected effort fell to a Walsh Island player who finished from close range to break the deadlock. This spurred the home side into life and they doubled their lead a minute later.

A goalmouth scamble was bundled over the line despite the best efforts of the Portlaoise defence. It was all Walsh Island now and they added a third just at half time, scoring from a rebound after Ben Malone had made a remarkable save in the Portlaoise goal from a penalty kick.

The second half started as the first half finished with Walsh Island in the ascendency and they scored a fourth after some persistent pressure with a goal from a corner kick. The Portlaoise players, to their credit, never dropped their heads though and started a mini revival.

Max Ryan, Alastair Cleland and captain for the day Emily Flynn were putting in some excellent challenges to put the visitors on the front foot again. They got their reward when Sean Powders put Aaron McCormack through on goal who made no mistake from close range. McCormack got a second three minutes later after some tenacious work by the Portlaoise midfield sent him free and he didn’t disappoint with an excellent near post finish.

It was the turn of the visitors now to dominate but try as they might they couldn’t find a third goal. Credit to Walsh Island who defended magnificently. With time almost up Walsh Island broke out of their defence and scored to put an end to the Portlaoise revival.

Overall this was a great contest with some excellent football on show in difficult conditions. Well done to both sets of players.