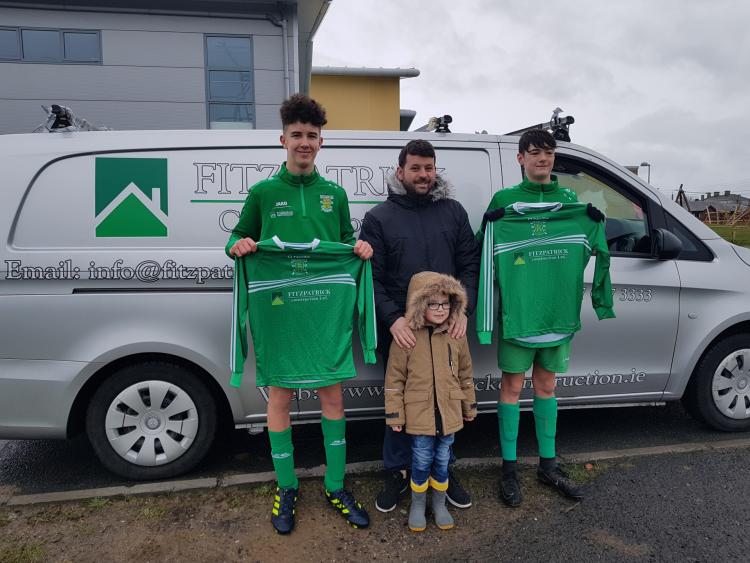 Portlaoise Town hosted Kildare Town for the second leg of the Midlands Cup quarter final with the tie delicately poised at one a piece.

In the opening 15 minutes the exchanges were tight with both teams a little tentative in possession. Then out of the blue Portlaoise created and finished an outstanding team goal that was started by the majestic Darragh Kelly who made yet another interception and played a neat one two with his keeper, before finding Brian Smith.

He in turn linked with Jason Horan who crossed first-time for Tiernan Cahill to finish sweetly with the outside of his right boot. Within minutes Brian Smith provided for Tiernan whose shot went over the bar from twenty meters out.

In the twentieth minute Kildare were denied a certain equaliser when their right winger had his thunderous shot body blocked by the courageous Jamie Preston. An excellent Brian Smith cross was superbly intercepted by the Kildare left-full from the toe of Tiernan Cahill.

The Portlaoise central pairing of Daire McDonald and David Olubowale were now dictating the central third with excellent assistance from their wide men Ben Dempsey and Jason Horan along with left-full Josh Hogan who was getting forward in support at every opportunity.

In the thirtieth minute Portlaoise doubled their lead when Darragh Kelly picked out Brian Smith with an excellent pass through the centre. Brian swivelled took a few steps forward before unleashing a thunderbolt into the top left corner of the net from fully twenty-five meters.

Jason Horan then just failed to get on the end of Daire McDonald’s pass behind the Kildare defence. Within minutes McDonald struck a fine effort just to the left of the Kildare goals from twenty meters having started the move which involved Ben Dempsey and Jamie Preston. The Kildare custodian did well to touch a long range Ben Dempsey effort out for a corner.

With six minutes to play in the half Ben Dempsey won a free on the edge of the 'D'. Darragh Kelly’s strike was blocked by the wall into the path of Daire McDonald who saw his first time strike parried for a corner by the vigilant keeper.

Kildare had two opportunities before the half concluded. The first when their left winger cut in field on an excellent run and fired a great shot just wide of the far post from a difficult angle. The winger then turned provider for his striker who shot just over the Portlaoise bar from inside the box.

Daryl Ntumba who was introduced at half time used his pace to stretch the Kildare rearguard before crossing just behind the supporting Ben Dempsey. Luke Dunne O’Connor shot just wide following a great run from David Olubowale.

Despite Portlaoise continuing to dominate Kildare were still capable of countering with great effect to win a number of corners. From one of these Conall Rowney did well to advance smartly and smother the effort of Kildares central mid. In a slick Kildare counter attack Kyle Enright cleverly stymied the Kildare front runner with a well timed challenge.

Kildare moved their excellent centre half to midfield in a gamble to turn the game around. He certainly stymied the Portlaoise dominance in the centre of the park however; Portlaoise now created a series of great opportunities from the flanks.

In an excellent move involving Josh Hogan, and Cillian Friel, Luke Dunne O’Connor was harshly adjudged to be offside when he got on the end of Olubowale ’s precise through ball. Cillian Friel had a telling pass from Ben Dempsey expertly intercepted by the Kildare number five. A beautiful James Preston cross was bravely smothered by the keeper at the feet of Cillian Friel.

An audacious James Wheeler flick beyond the Kildare central pairing into the path of O’Connor who was adjudged to be offside. From Portlaoise’s next threat James was offside following great approach play from Friel and O’Connor.

Kildare pulled a goal back with three minutes to play when they broke down yet another Portlaoise offensive and in a slick four man move their striker had his close in first time effort well parried by the quickly advancing Rowney.

The ball fell kindly for the striker who did very well to convert from an acute angle. Kildare had one more opportunity when their midfielder volleyed wide from an acute angle five yards beyond the back post from a very deep corner from the far side.
It was great to see Michael Culliton make a cameo appearance for the last five minutes after being out through injury for several games. Portlaoise will now meet high flying Naas in the semi-final of this competition.