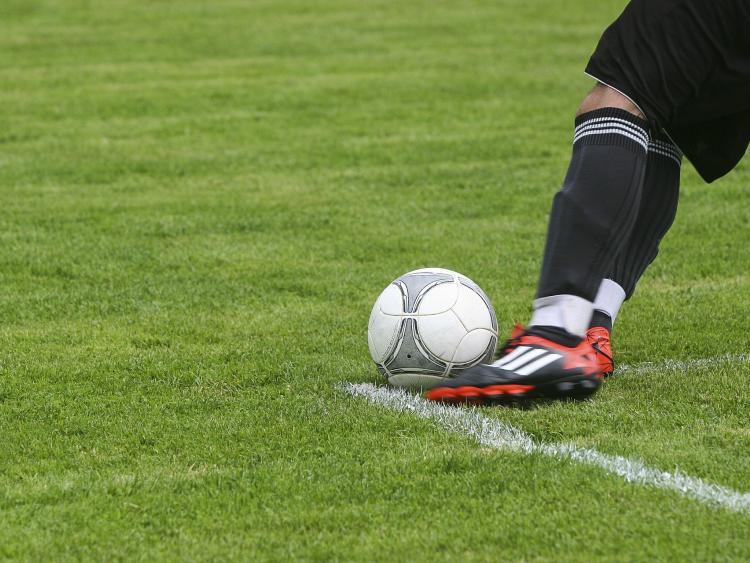 Portlaoise Leisure Centre was a hive of football activity on a pleasant Saturday morning last, dealing with the overflow of games from Rossleighan Park.

The morning got off to a great start with the excitement of the U-10 derby, and after further games Portlaoise Utd stepped up to the plate to take on league leaders Clara Town. Portlaoise suffered a heavy defeat to Clara in their last fixture three weeks ago, and with regular keeper Hubert Siller ruled out with injury the task was a daunting one for the home side.

However, as often happens in sport it spurred them on, and stand in U-13 keeper Kacper Banasik had an outstanding game despite a narrow 1-0 defeat.

Portlaoise started well, with the outstanding Imran Shitta leading by example with a Trojan midfield display, his tackling and distributing excellent throughout the game. The first half-chance of the game fell to Clara however, with Kacper pulling off a fine save to deny the Clara front man.

The Portlaoise defence of Andrew Goggin, Ben Dwyer, Luke Makem and Dave Burke were playing well as a unit, defending well and playing ball from defence to wide men Fionn Devoy and Matteusz Kocoon to start attacks for the home side.

Scott Coyle was tormenting the Clara midfield with his work rate and some excellent skills as Portlaoise grew in confidence and went for the lead goal that their impressive start deserved.

Clara to their credit held firm, and as the half wore on came more into the game, with Kacper denying them with two good saves and Dave Burke with a vital interception keeping the game scoreless at half-time.

Portlaoise took full advantage of the break to regroup, and started the second half in the ascent again, with Imran and Scott pulling the strings again, Imran setting Thomas up for another fine strike on goal. It was not all one way traffic however, and Clara came back strongly, Kacper called into action firstly to act as sweeper to twart a Clara attack and then pulling off a brave save at the foot of the post.

As in the first half Clara came more into the game as Portlaoise legs tired from the massive effort, resulting in Portlaoise introducing Sean O Sullivan, Matthew Walsh, John Ging and the returning from injury Cian Bartley-Bray.

The last ten minutes saw the game really kick into action, firstly when Clara forced a series of corners, and from the last of these pushing in the box resulted in a penalty kick. Kacper made a brave attempt but the well struck kick rattled the net to put the league leaders one up.

Within minutes Clara broke through again, but John Ging was back in his own area to clear for a corner as Clara looked set for number two.

Portlaoise heeded this warning and lifted their game, and a fine through ball from Fionn Devoy sent Sean O'Sullivan clear, unfortunately the Clara keeper spotted the danger and cleared to safety.

Shortly afterwards Scott Coyle made a sweeping run down the right wing, winning a corner in the process. From his delivery Luke Makem went close for Portlaoise,but the Clara keeper dealt well with the situation. With time running out Portlaoise threw everything into attack, and seemed set for a deserved reward when a hand ball resulted in a penalty being awarded. The resulting kick went just wide however as a relieved Clara held out for a vital three points.

For Portlaoise this performance can be a stepping stone for the future if they take confidence and work towards further improvement. This was there finest display of the season to date in their first season together, showing great character, work rate and team spirit, things that will stand them well in life as well as sport.

In an excellent team display Imran Shitta deserves special mention for his all round and brave performance, while young Kacper in goal excelled with not only his saves but distribution also.