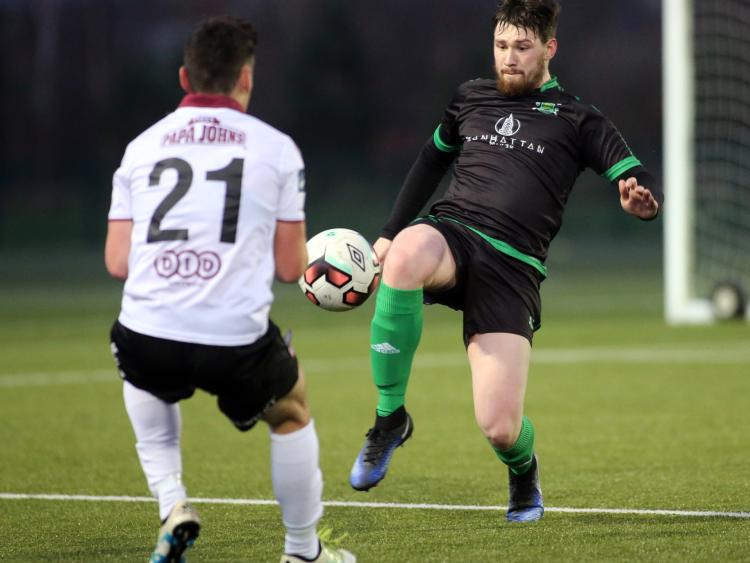 Portlaoise AFC first team suffered a setback in their promotion hunt on Friday night, when they were beaten 2-1 away to Maynooth University Town FC.

Maynooth started brighter and dominated possession for the first 18 minutes, but never really troubled Mateusz Cwienk.
Portlaoise settled into the game however, and had three shots blocked in quick succession, Jason Murphy with two efforts and Colm Poole, but Maynooth defended well.

On 24 minutes the visitors took the lead, Cwienk played a short kick out to Jason Caffrey and he played a delightful pass over two defenders heads and Jason Murphy produced a sublime piece of skill, before being taken down inside the penalty area. The referee waved play on and Colm Coss got to the ball but was taken down, and Murphy dispatched the penalty for his 12th goal of the season.

Portlaoise went close on 33 minutes but Murphy headed wide from and excellent Poole corner kick, and Murphy had a great chance on 40 minutes to put his side further ahead but David Sterio did well to keep out his effort and on 43 minutes Maynooth were level.

Portlaoise lost possession three times in quick succession and Travers played a great pass to Cillian Duffy to fire past Cwienk.
Portlaoise went close again just after the break when a long throw was headed goalwards by Coss, but Sterio produced a brilliant save, and Murphy almost had a second from a counter attack but his effort was blocked, then Mullaney’s long range volley was blocked as well.

However, Portlaoise were made to pay for not taking their chances when a free kick on 58 minutes came off the head of a defender and flew past Cwienk to give Maynooth the lead and ultimately the winner.

Portlaoise threw everything at Maynooth and Coss went close twice, while at the other end McDermott volleyed over after an excellent Maynooth counter attack and time ran out for Portlaoise.

Portlaoise host Beggsboro AFC for the first time on Friday night with a 7.45pm kick off in Rossleighan Park.