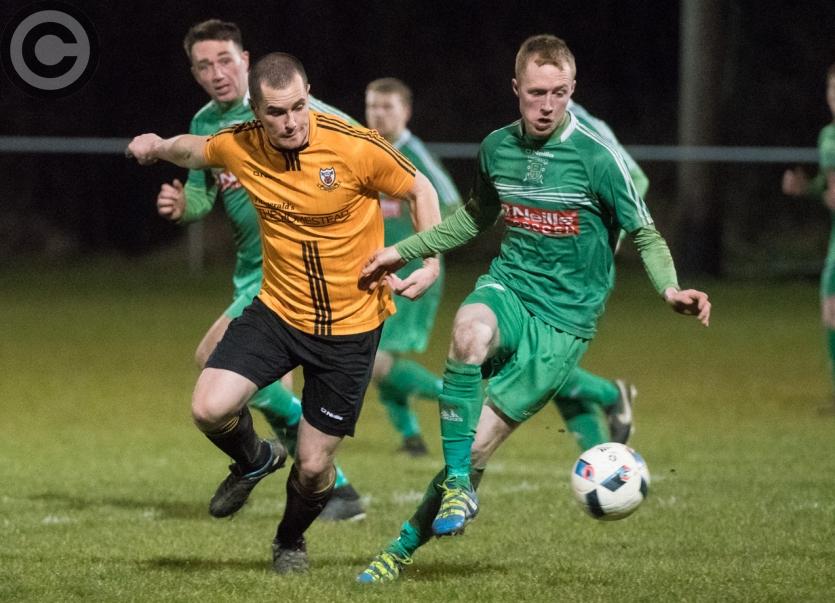 After suffering defeat the last day out, Portlaoise desperately needed to bounce back against Beggsboro last Friday night, and that they did, as they held out to defeat the opposition after a nervy finish in Rossleighan.

Colm Lyons should’ve put Beggsboro into the lead early on, but couldn’t sort his feet out to poke it past Matuesz Cwienk.

Jason Caffrey had Portlaoise’s opening chance of the game, but he blasted over on the half-volley. Portlaoise began to carve out opportunities, and Jody Dillon had another, turning his man using his strength, but his shot went wide of Jonathan Duggan’s post.

However, Portlaoise did finally break the deadlock five minutes later. A superb counter-attack resulted in the returning Colm Coss playing a one-two with Jason Murphy, before chipping it onto Murphy’s head, and he placed it into the corner.

Beggsboro had numerous half-chances as the first half ticked on, but a mixture of poor shooting, good defending from Portlaoise and Matuesz Cwienk standing strong in goals meant Portlaoise went in with a one goal lead at the break.

However, Beggsboro came flying out of the gate after the interval, and they found an equaliser a couple of minutes in to the new half. Cwienk pulled off a terrific save to keep out Colm Lyons from a corner, but Graham Dixon prodded home the rebound.

Portlaoise seemed to take this goal as a wake up call though, and they fired themselves back into the lead within minutes. Colm Coss, who was outstanding throughout, scored the goal. Jason Caffrey whipped in an inviting set piece, and the big Mountmellick man managed to steer it past Jonathan Duggan in goals on the volley.

Beggsboro nearly hit straight back through Paul Fitzgerald, as he showed strength to keep the ball and get off a shot, but it was at a comfortable height for Cwienk.

However, Portlaoise were looking more and more dangerous on the counter-attack as the game opened up. They looked to have sealed the result when Jason Murphy grabbed his second goal of the game, taking it past the defender and placing it into the bottom corner.

However, Portlaoise, throughout this season, always seem to become uncomfortable when they take a lead. They began to sit deeper and deeper, and Beggsboro took advantage of this, with Paul Fitzgerald grabbing a goal from a set piece, after a number of deflections.