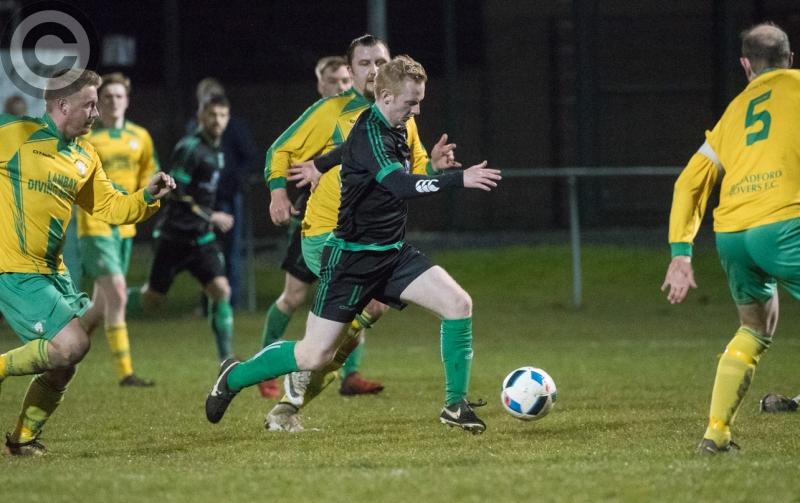 Colm Poole about to score the opener for Portlaoise against Broadford. Pic: Denis Byrne.

A win in this one would’ve put Portlaoise third in the table, so to only come away with a draw against second from bottom Broadford Rovers will be seen as a disappointment in the Portlaoise camp, although they did have to play a large part of the second half with ten men.

Colm Poole registered Portlaoise’s first shot on target for the night, but it was a routine enough stop for Kevin O’Reilly in goals. Portlaoise started the game on top, as they began to pile the pressure on the Broadford Rovers defence.

A sweet delivery from Jason Caffrey was met by the head of Jason Murphy, but he failed to get any sufficient contact on the ball. However, the home side’s early work paid off soon after, as they grabbed the opening goal.

Centre-back Danny Molloy found himself at the other end of the field, and showed off some impressive dribbling skills. He then laid it into the path of the onrushing Jason Murphy, who dispatched comfortably past Kevin O’Reilly.

Portlaoise had been well on top before the goal, with Broadford Rovers struggling to break out of their own half. However, the goal seemed to both wake the away side up and Portlaoise started to get complacent. Fifty/fifty balls that they were winning earlier were no longer won.

Broadford Rovers had their first real opportunity of the evening when Sean Huddock put in a pinpoint cross onto the head of Ben Mitchell, with header going within inches of Joe Walshe’s post.

Walshe made his first save of the night from a Brian Reilly flick-on, with Walshe having to act quickly to steer wide and keep Portlaoise’s lead intact for the second half.

However, that lead didn’t last for long in the second half, as the half-time break failed to rejuvenate Portlaoise. Brian Reilly atoned for his earlier miss, as the tall winger rose highest from the corner to head home.

Portlaoise carved out their first chance in what seemed an eternity afterwards, with Oisin Fitzpatrick taking it past his man on the sideline, and laying it into the path of James Mullaney. However, Broadford Rovers put bodies in the way of Mullaney’s shot.

The passing out from the back game that Portlaoise adopted so successfully for some of the first half, seemed to be scrapped for a route one strategy. Jason Caffrey whipped in a corner on to the head of striker Jody Dillon, but he couldn’t control the direction of it.

Portlaoise were dealt with what looked a huge blow when Shane Collins was sent off for giving out to the referee. However, that seemed to ignite Portlaoise to go get the winner.

Jody Dillon had two huge opportunities to win it near the end, particularly the last one. However the ball was cleared off the line, and Portlaoise had to settle for a point on this occasion.