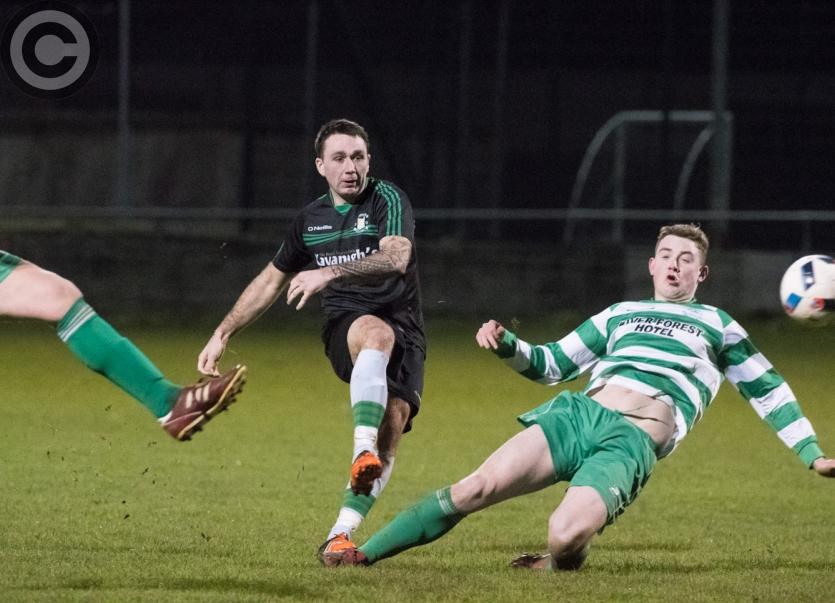 Aaron Rafter was the hero for the Portlaoise side with two goals inside the opening four minutes in a brilliant first half performance that should have had them more than 3-0 up.

The sides played out a highly entertaining 0-0 draw earlier in the season in Portlaoise, with some brilliant attacking football on display that night and the game on Sunday was no different.

Portlaoise dominated the first half, while Lucan were superb in the second half but were denied on numerous occasions by some outstanding goalkeeping from Joe Walshe.

Portlaoise kicked off, kept possession and were 1-0 up before a Lucan player touched the ball, following some brilliant movement, passing and a through ball from Colm Poole that Rafter chipped over Darren Kelly to put his side in front.

A clearly shocked Lucan were further behind just three minutes later when a Jason Caffrey free kick was headed back across goal by Jody Dillon for Rafter to head home his second of the game.

Lucan settled into the game and Eoghan White reacted quickest to deny James Lee inside the penalty area before Portlaoise missed a glorious chance to go further ahead with another great team move that ended with Oisin Fitzpatrick crossing but James Mullaney headed wide with an open goal.

Lucan came close on 28 minutes when Brandon Payne’s free kick was pushed onto the crossbar by Joe Walshe and Rafter tidied up the danger but just nine mins later it was 3-0 to the visitors.

Jason Caffrey’s pin point free kick was headed home by Jody Dillon for his 10th goal of the season. Dillon could have doubled his tally when he stole the ball off Sean Nolan but his effort was off target.

Lucan dominated the second half and had a great opportunity in the opening minute when Stephen Kinch got free but Walshe was out smart to deny him with his feet, Conor Foley then went close from distance. Portlaoise went close again when Rafter’s headed was brilliantly saved by Kelly after some great play by Caffrey and Jason Woods.

Marco Chindea was unlucky to see his effort hit the base of the post as Lucan pilled on the pressure and they got their reward on 65 minutes when sloppy defending left Chindea free and he placed well past Walshe.

However, Walshe now came into his own with three outstanding saves, first from Chindea as he pushed over at full stretch then denied James Lee and Jamie Aherne with a double save and time ran out for Lucan and Portlaoise went home happy with three valuable points.