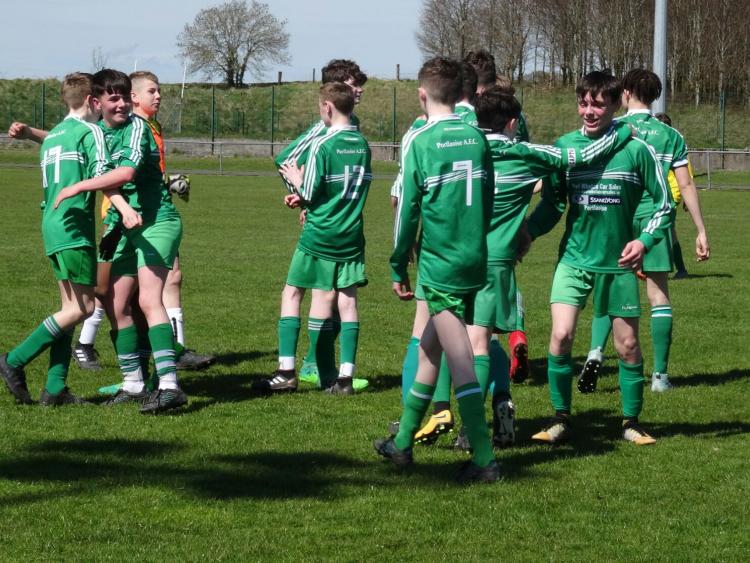 The Portlaoise team celebrate after their win over Mullingar Pumas.

Portlaoise Utd travelled to Gainstown on a beautiful Saturday morning last for this second leg fixture 2-1 down, and added to this they were without regular keeper Hubert Siller, along with influential front men Thomas Swords and Matteusz Kocoon due to illness and vacation.

Despite this Portlaoise were quietly confident of advancing due to their excellent second half display in the first leg , and aware that Imran Shitta’s late consolation goal could prove vital, which proved to be the case.

Portlaoise had U-13 keeper Cacper in goal, and he along with the defence of Andrew Goggin, Ben Dwyer, Luke Makem and David Burke were kept busy early on as Mullingar shaded the early exchanges. This soon changed however as the Portlaoise took control in midfield.

Here Imran Shitta was once again a tower of strength in the centre, while either side of him Finn Delaney and Cameron Clarke were having their best games of the season, tackling, tracking back and supporting the attack also.

Likewise Fionn Devoy on the right wing, tormenting the home defence with darting runs and some excellent crosses. From these Portlaoise twice came close to scoring, first when Sean O'Sullivan tested the keeper and then John Ging struck the post with a fine effort.

Mullingar were a threat on the counter, with Portlaoise guilty at times of allowing them cut through without a tackle, and they paid the price when a well-struck shot found the net despite Cacper’s best efforts to keep it out.

Portlaoise regained their composure, with Matthew Walsh putting in some excellent tackles and breaking up the Mullingar attacks. With five minutes to the break Portlaoise got the goal their efforts deserved, when the keeper parried Fionn Devoy’s attempt and leading scorer Sean O'Sullivan did what he does best, rifling home from close range to draw level.

With half time fast approaching a lapse of concentration saw the Mullingar striker break through and blast past Cacper, and things now looked good for the home side, who were two up on aggregate.

At the break Portlaose knew that they now needed to step up to the plate, they had created enough chances to be well ahead over the two legs, they just needed to put them away. Five minutes into the second half Cian Bartley Bray was introduced, and what an impact he made.

Cian had made an excellent start to the season, putting in some man of the match performances, but a double injury to his arm and knee had curtailed him in recent months, just recently getting back to match fitness.

Within minutes he changed the game, as Ben Dwyer fed Fionn Devoy and Cian latched on to his pass and powered through the Mullingar defence before rifling past the keeper when through one-on-one. Portlaoise fought tooth and nail now throughout the pitch, with Calum Leonard in particular winning possession and distributing well on the left wing.

Again the reward came when Finn Delaney won a fifty-fifty ball on the right, squared to Cian who put Imran through and Imran rattled the net to Portlaoise ahead on aggregate with ten minutes remaining. Minutes later Fionn Devoy was through on goal but was called back on what was a marginal off side decision.

The last few minutes saw Mullingar throw caution to the wind to rescue the tie. Portlaoise were forced onto the back foot and Andrew Goggin again came to the fore, doing what he has done all season, calmly dealing effectively with what comes his way without any fuss and distributing well to the front men, while David Burke on the left was making some timely interventions.

The last few minutes proved nerve-wracking for Portlaoise, with Ben Dwyer putting his body on the line to block a goal bound shot, while Luke Makem got a vital tackle in to clear for a corner as the Mullingar front man was about to pull the trigger.

The final whistle sounded shortly afterwards for an overall deserved victory for Portlaoise, granted on the dreaded away goal role.

Overall a very satisfying two legs for Portlaoise. They displayed character, work ethic, team play, resilience and discipline, these characteristics will stand them good not just in football but more importantly in life.

It is their first year together as a team, with Matthew Walsh and Fionn Devoy set to get their first medals in football in the final as they had not played competitive before this season, while John Ging and Cameron Clarke are playing their first full season having come through the academy.

Lastly thanks and credit to the parents, again the support was very positive as has being the case throughout the season when results were not going well in a tough league campaign.