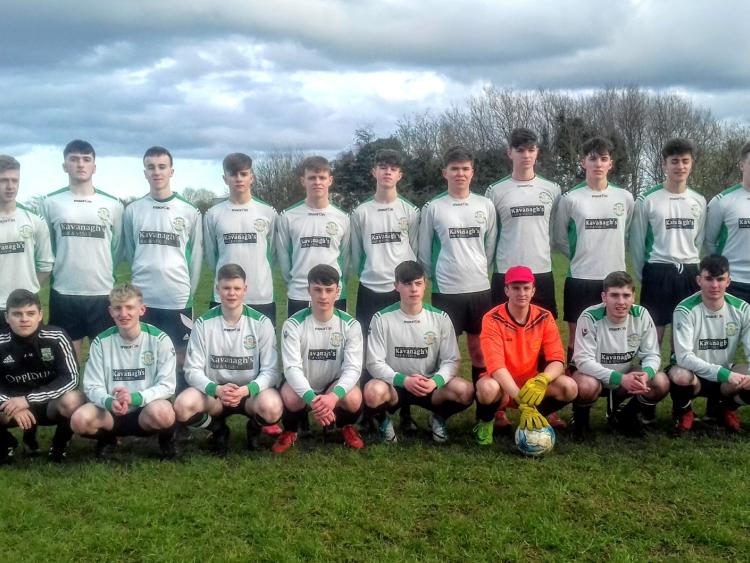 The Portlaoise U-19 team.

Portlaoise clinched the league title with this hard fought victory in Kilbeggan on Saturday night in their last game of the season.

Portlaoise started well and Ronan McEvoy, Jack Langton, Alan Roberts and Jason Woods all went close to scoring in the first 20 minutes of the game, but fine goalkeeping by Cormac Harnan kept them at bay.

Portlaoise then finally scored on 25 minutes when after good work on the left by Jack Langton saw his pinpoint cross was volleyed home by Ronan McEvoy to make it 1-0.

On 36 minutes, the two combined again and Langton sent McEvoy through and he chipped the keeper to make it 2-0 and that's how it finished at the break.

Kilbeggan then began the second half in style and went close on two occasions from Peter Whelan and Conor Daly, but Adam Scully in the Portlaoise goal made two good saves.

They then scored on 60 minutes when, from a corner, Conor Ferry headed home to make it 2-1 and it was game on again.
Jack Langton, David Nolan and Ronan McEvoy went close before Jason Woods scored on 70 minutes after another brilliant assist from Jack Langton to make it 3-1.

Josh Malone then scored a goal for Kilbeggan on the 80th minute, but Portlaoise held on and it finished 3-2 and they clinched the league title among jubilant scenes at the final whistle.