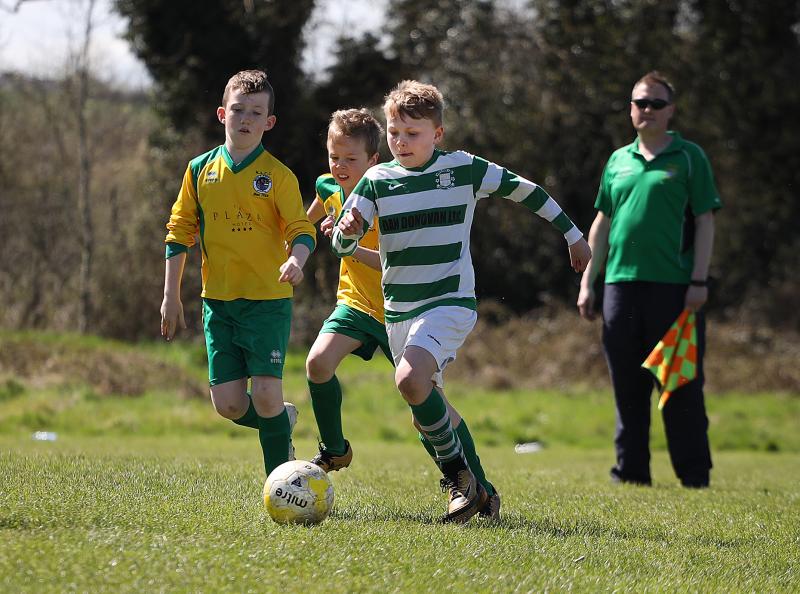 Action from the Portlaoise AFC U-10 game against Mullingar.

Portlaoise United were involved in yet another exciting game in this shield quarter final 2nd leg at home to Mullingar.

Mullingar won the first game two-nil and it was a nice advantage going into this second game. Mullingar settled into the game first and were forcing Portlaoise to defend from the start.

It was apparent that there was a lot of nervous players in the Portlaoise team as they struggled to find their touch. Seven minutes in a harmless Mullingar cross got deflected past the Portlaoise keeper to make things worse for the home side.

Rocco O'Reilly was having a great game in the Portlaoise goal with his distribution of the kick outs excellent. Ryan Keane, Rhys Lawless and Harry Browne were working hard to get their team back in the tie and as the half progressed Portlaoise came more and more into the game.

Gary Brennan, Finn Dawson and Leah Brennan in midfield were now having a big influence on the game and Portlaoise forced a few corners, unfortunately they never troubled the Mullingar keeper.

Ross Dunne and today’s captain Conor Dunne were working tirelessly as usual to create chances but Mullingar struck again before half time with a great passing move down the middle and their striker slotted home, meaning at half time it was 2-0.

Many sides would drop their heads at this stage but Portlaoise refused to throw in the towel and started the second half with great urgency. Holly Murphy, Tom Coleman and Oisin Duffin were now all causing Mullingar serious problems.

Within minutes Tom Coleman picked up the ball in midfield, turned his man and shot from 20 yards to the top corner for a brilliant goal. This gave Portlaoise a great lift and they now took control of the game.

Danny Gavin and Charlie Dwyer were now well on top in midfield and breaking down any Mullingar attacks.

Portlaoise then put a great move together down the right wing, and Oisin Duffin put in a great cross that was finished to the net by Tom Coleman for his second goal.

Portlaoise were now playing their best football of the season and had Mullingar pinned back into theIr own half. Portlaoise forced corner after corner without any reward, and eventually Ross Dunne powered home to put Portlaoise ahead on the day.

Portlaoise now threw all they could at Mullingar to complete a remarkable comeback and level the tie on aggregate, but eventually ran out of time, Mullingar going through 4-3. A very brave effort indeed.

Denis Browne in goal had no shots to deal with in the second half such was the Portlaoise dominance, however Mullingar are a fine side and pass the ball around very well for an U-10 team, and we look forward to meeting them again in the future and wish them well in the semi-final.

This Portlaoise team can hold their heads up high as they had a fantastic first season in the league and cup with plenty of enjoyment playing football.

If they continue to work hard at training they will no doubt make further progress. Great credit must go to Mick, Derek, Keith and all the parents for helping the team through their first season.