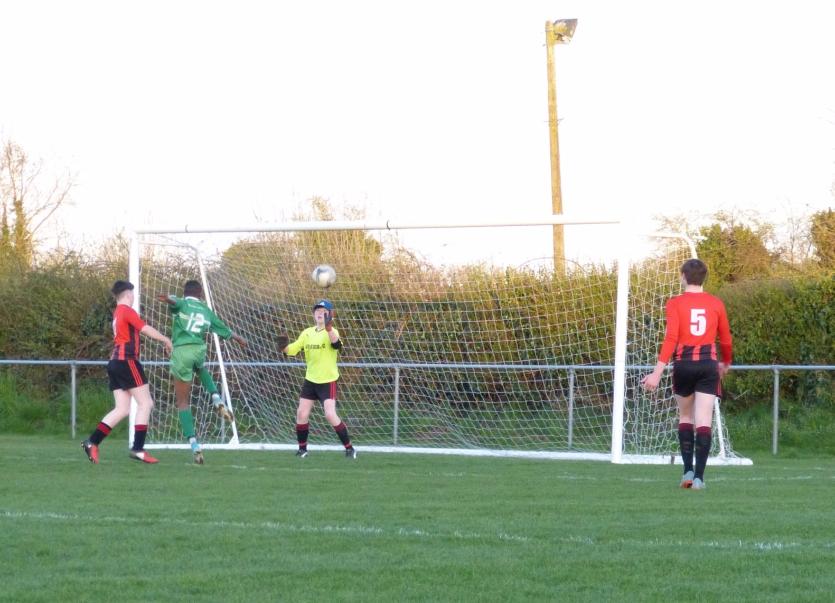 In a period of four days, Portlaoise AFC were playing match number three and this was the return leg in two-legged Stokes Cup tie.

Portlaoise AFC were 4-1 up with four precious away goals coming into this. That match was played in torrential wind and rain and finished in almost darkness earlier in the week, but this game was played on a beautiful sunny evening.

AFC’s previous match saw them fall to a disappointing league loss away to Kinnegad on a night that saw nothing go their way so this was a perfect opportunity to put things right.

AFC and Killeigh both started competitively but Killeigh had two early chances with one free producing a fine save from Conor Brown in goals. With eleven minutes gone though the visitors punished a fumble at the back to reduce the deficit on aggregate, making it 0-1 in the game 4-2 on aggregate.

Killeigh were using physical presence to try and knock AFC off the ball but they held their own. Portlaoise started to get a better rhythm into their attacking play and saw a good ball at shoulder height pinged through the defence from Jamie Toman to Cathal Lee, but the Killeigh keeper just pipped him to the ball.

Two minutes later and a free at the left edge of the box for Killeigh nearly made it a very tight affair but it went over the bar.

With ten minutes left to half time it was 1-1 on the night. Ben Doyle sent a lovely pass to Cathal Lee who passed to Robbie Farrell outside the box, and Robbie hit a cracking looping shot over keeper. Robbie’s hat trick in the previous leg had been the difference.

Within a minute there was another goal, making it 2-1 to AFC as Kanye Tshula and Jamie Toman linked up well again on the left wing and a ball was popped over to the far right side for Cathal Lee to volley home and nearly taking out a defender, who was desperately trying to prevent it going over the line. It was now 2-1 in the game and 6-2 on aggregate.

With four minutes left in the half, remarkably, there were two more goals to come.

It was 3-1 to AFC after a super cross from Cathal on the right side into the box to find Jaime Toman who flew through the air like Bruce Lee to guide it in.

It was nearly 4-1 when Ben McDonald fired a cross toward the penalty spot and Ben Doyle took one deft touch and then volleyed in on goals, but the keeper just tipped it over as it tried to go under the bar. Then a comical goal that would keep pundits talking for ages - the phantom goal.

The last minute of the half saw it 3-2 after a decision by the referee to call a ball over the goal line from his position closer to the centre circle despite the protestations of anyone from AFC close to the goals. No chance ref! The goal stood.
At half-time it was 3-2 (7-3 on aggregate).

In the second minute of the second half it was 4-2. Cian Rafter was heavily fouled. Robbie Farrell took a quick free. The ball was played about very well up front with Cathal Lee and Cian finding Robbie who passed to Ben Doyle who dinked his way from the edge of the box and dribbled past two and beat the keeper. An excellent team goal.

Killeigh beat the offside trap straight after but pulled it wide left. Killeigh were still creating chances as they tried to exploit gaps at the back.

On 41 minutes Ben McDonald produced a fine pass to Jamie Toman who leapt like a salmon at the back post but headed over.
Four minutes later it was 5-2, after a magical finish by Eoin McGrath from the left edge of the box curled into far top corner.

One minute later it was 6-2 after a lovely ball from Ben Doyle to Ben McDonald raiding in on the right who lobbed the keeper. It was now 10-3 in aggregate.

The game was turning into a goal fest but AFC were still giving up some goals too as Killeigh never gave up and made it 6-3 from a header in from a corner at the back post. On 53 minutes it was 7-3. Ben McDonald again involved along the right picked out Jamie Toman who stuck it away at the second attempt.

One more minute and yet another score from Killeigh. A lovely finish by the Killeigh striker who took the AFC defender out with one touch and fired low and left past the diving Conor Brown, making it 7-4.

On 61 minutes it was 8-4. Dan Ubesie took advantage of a loose ball in the box from an AFC corner and drilled it home. Finally the last goal of this crazy game came on 65 minutes and it was 9-4. A quick throw worked between TJ Delaney and Cathal Lee to find the gazelle-like Dan Ubesie who grabbed his second of the night with another fine leap.

The final score was 9-4 on the night and 13-5 on aggregate. Definitely value for money and a great reaction to the previous defeat by AFC but will have to tighten up their defending as another four were conceded in this game. All games are cup finals ahead to the season's end to push for two chances of silverware.

Referee’s Man Of The Match was Ben Doyle with plenty of creativity around the pitch but several close contenders in this very entertaining match.