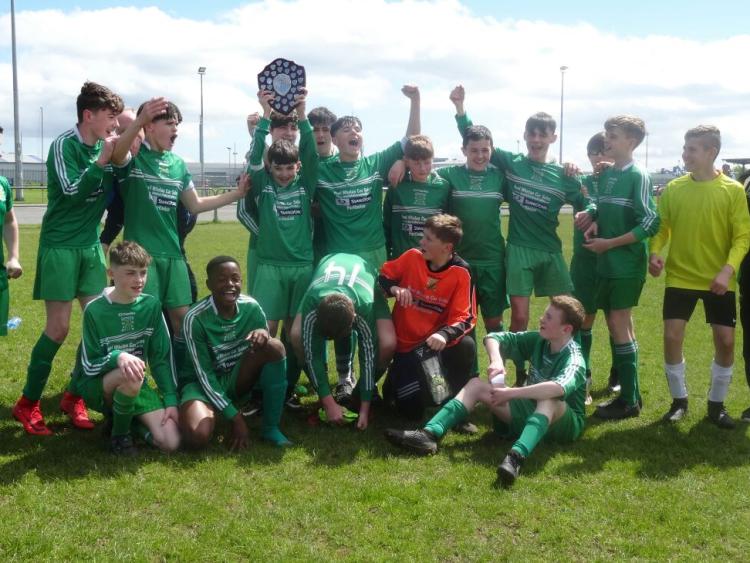 The Portlaoise team celebrate their victory over Rahanine.

Leah Victoria Park, Tullamore was the setting on beautiful Saturday morning last for the first meeting of these sides, as the league season saw Portlaoise play in the East section, while the Westmeath side play in the West. Along with the weather the pitch was in excellent order also, providing the opportunity for some good football.

Portlaoise came out of the blocks strongly, creating some fine chances early on. Thomas Swords and Sean O'Sullivan went close in the first five minutes, and two minutes later a fine through ball from Imran Shitta resulted in Thomas testing the keeper again.

Portlaoise were nearly paying the price for this shortly afterwards when a slip in defence saw the Rahanine front man clear through, but Hubert Siler came to the rescue with an excellent save.

Portlaoise upped the tempo again after this let off, and they got their reward when a superb through ball from Fionn Devoy sent leading scorer Sean O’Sullivan through, and he rattled the net, much to the delight of the Portlaoise supporters.

Rahanine reacted to this by gaining some possession, but good defending by Dave Burke, Andrew Goggin, Ben Dwyer and Luke Makin kept them at bay, not allowing them any clear chances. The midfield trio of Finn Delaney, Imran Shitta and Cameron Clarke were well on top, dictating play and working back to help their defence.

John Ging was keeping the Rahanine rearguard busy, linking with his midfielders with some neat touches and stretching the defence. The half finished with Thomas Swords having a another fine effort saved, while at the other end Matteus Kocon put in a strong challenge to twart a Rahanine breakaway.

The second started with Rahanine on the attack, with Finn Delaney, Dave Burke, Matthew Walsh and Luke Makin dealing well with some pressure, but Portlaoise soon regained control. Calum Leonard was causing havoc with some fine runs down the right wing, a regular feature of his play in recent games.

Cian Bartley-Bray, returning to top form after a recent injury, went close for Portlaoise after being set up by Fionn Devoy. Minutes later Thomas Swords went close to doubling the lead, with Fionn the provider once again. Portlaoise forced a succession of corners, with Imran and Luke testing the impressive Rahanine keeper with two headed efforts.

Portlaoise came close to wrapping the game up on two occasions in the last quarter, firstly when Fionn fed Thomas and his excellent effort struck the post, and minutes later Imran was brought down in the box, but the keeper pulled off a fine save to deny Portlaoise some breathing space.

This resulted in a nervous final few minutes for Portlaoise, with Andrew Goggin again a cool head in defence, while captain Ben Dwyer played some intelligent balls over the Rahanine defence to relieve the pressure as the opposition tried to rescue the game. Portlaoise held firm however and were deserving winners on the day.

Overall a very satisfying day for this panel and a just reward for them in their first season together. Despite a tough league season the attendance at training was excellent in all weather. In recognition of this each player got good game time on a roll on/off system, and this proved effective on a warm day.

A special day for Matthew Walsh and Fionn Devoy, gaining their first medals in football in their first season playing, also for former academy players John Ging and Cameron Clarke in their first full season.

Portlaoise also had academy player Finn Brophy involved for the day as he has trained throughout the winter with them, along with U-13 keeper Kacper Banasik who deputised for Hubert in the semi-final.

Credit to the officials today also, its easy to praise when a team wins but both sides will agree that they handled the game in a friendly manner, with not one controversial incident. Lastly thanks to the parents, again out in force and a massive positive support today, much appreciated.