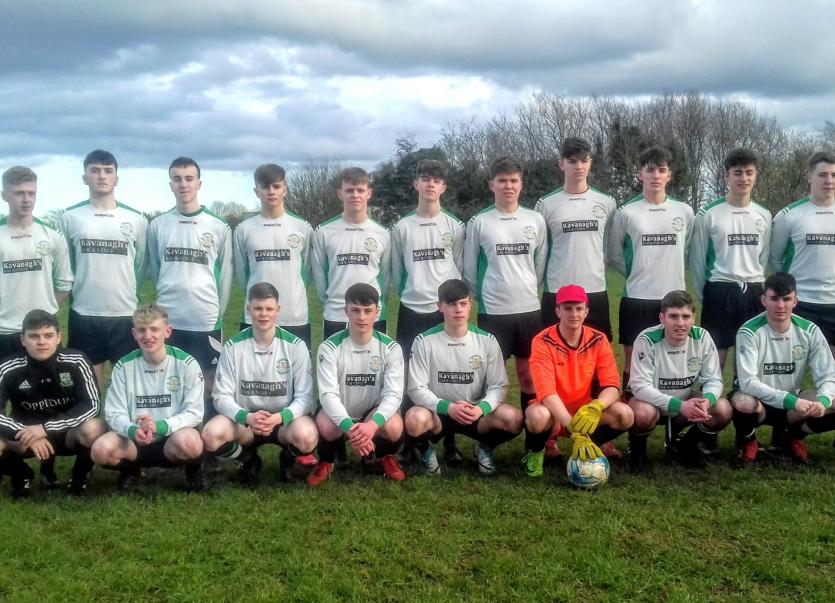 The Portlaoise U-19 team.

Portlaoise are into the CCFL U-19 Cup final after this close fought encounter against Premier side Clongowes Wood in Rossleighan Park on Saturday.

Then on 35 minutes Portlaoise made the breakthrough when good work on the right wing by Jason Woods saw his cross volleyed home from the edge of the box by Ronan McEvoy to make it 1-0.

Eoghan Brennan then went close on 40 minutes but volleyed just over and just on half-time Jason Woods saw a brilliant effort saved by the keeper and it finished 1-0 at the break.

Portlaoise then started the second half in style and Ronan McEvoy, Jason Woods Andrew Swayne and Jack Langton all went close in the first 20 minutes of the half. Clongowes then had two half chances on 65 and 70 minutes but the town defence kept them at bay.

Then on 82 minuted brilliant work by Eoghan Brennan and Oisin Kiernan saw Kiernan power through and score with a brilliant volley to make it 2-0 and Portlaoise held out after that to reach the final.

This was a great win by the Portlaoise U-19s Division One team over Premier side Clongowes Wood and they now play the CCFL Premier League Champions Emo Celtic next Saturday in the final which is fixed for Abbeyleix with a 12pm kick off.