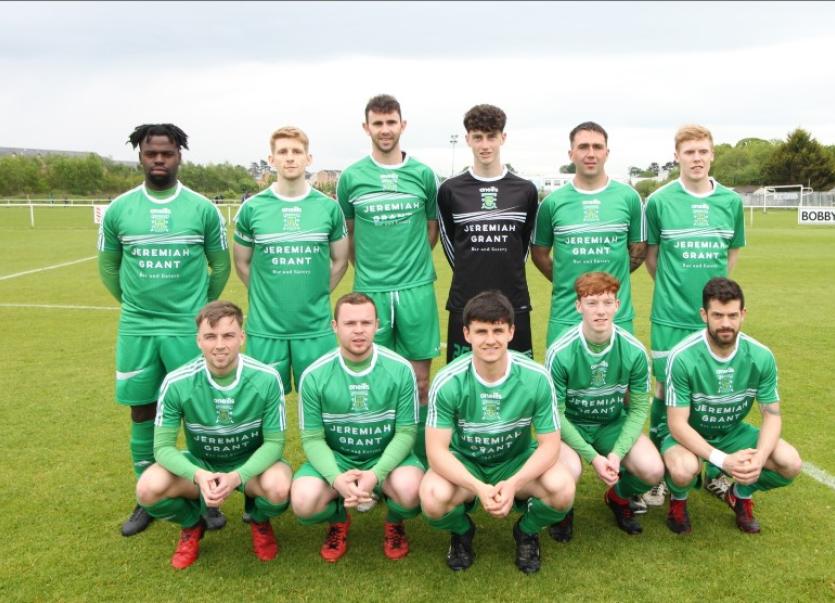 A deflected goal minutes after half time proved to be the undoing of Portlaoise AFC on Sunday, as they lost out to Edenderry Town in the Lummy O'Reilly Cup final.

Ger Dunne's side were left to rue lapses in the early stages of both the first and second half, as both Edenderry goals came within minutes of the opening of either half.

Outside of that, Portlaoise were more than a match for the Offaly men, but in what was a scrappy game overall, neither side could create any real clear-cut chances.

Portlaoise were not helped by a pretty major scheduling conflict either, with manager Ger Dunne forced to miss the game as he is part of Martin O'Neill's back room team with the Irish senior team, and so he was on duty in Scotland.

Portlaoise were hit with an early sucker punch here, as Edenderry Town took the lead with barely five minutes played.

They had won a corner on the right wing, and left-back Barry Clancy floated in a perfect cross for the attacking side, and their giant midfielder Aaron McDonald rose highest to power a header into the top corner.

It was the nightmare start for Portlaoise, but at least it gave them plenty of time to get back into the game.

In truth, they wasted little time in hauling themselves back on level terms, and they had teenager Niall Doran to thank when the equaliser arrived.

He did well to control possession inside the area and make room for a shot, with his effort deflecting off an Edenderry defender and looping into the to corner.

That left the score 1-1 with around ten minutes played, and the game looked set to be a real entertaining and, hopefully, high-scoring affair. However, with a cup title on the line, both teams were understandably a little cagey, and there was little in the way of goalmouth action for the remainder of the first half.

Edenderry won a free kick 30 yards out midway through the half, which McDonald lined up to take, but his attempt to catch out the wall by hitting it low in the hope they all jumped was thwarted, and Portlaoise managed to clear the ball to safety.

Both teams took turns in trying to impose themselves on the game, but neither side could manage more than a handful of passes in succession before the opposition bustled in and turned over the ball.

Edenderry created the next clearcut chance in the 25th minute, as Jack Foran made space for a shot from the edge of the box and tried to bend one inside the right hand post, but Sean McCormack was alive to the danger and he got down to make a smart save for Portlaoise.

The only other real action of note in the first half came in the closing stages of normal time when Niall Doran broke onto the ball in the Edenderry penalty area, and despite shipping a challenge from the covering defender, the referee waved away Portlaoise calls for a penalty.

With no further shots or attempts at goal before the break, the teams headed to their half-time huddles deadlocked at 1-1 each.

Portlaoise made a chance at the break to try and bring more of a cutting edge to their attack, with top-scorer Jason Murphy introduced in place of Jody Dillon.

Before the men in green even had a chance to put the Edenderry defence under pressure, however, they found themselves a goal down.

Again it was Aaron McDonald who provided the strike for Edenderry, although much like the Portlaoise goal, there was more than a hint of good fortune about it.

Edenderry found McDonald on the edge of the area, and his shot for the bottom right corner took a massive deflection, wrong-footing Sean McCormack and leaving him with not chance to prevent it creeping into the bottom left corner of the net.

Again, with the setback being so early it still left Portlaoise with plenty of time to plot a comeback, and ten minutes later they almost fashioned an equaliser.

Oisin Fitzpatrick did well down the right wing to get the ball to Jason Murphy, and jinked away from his marker and got a good left-footed shot away, but it was well-saved by Eddie McDonald in the Edenderry goal.

Much like the first half, most of the action in the second half took place in the middle third of the field, with chances few and far between. Edenderry did twice threaten from corners, but Dean Cummins saw his effort flash wide of the post.

They almost got the goal they craved with ten minutes to go when Murphy again got a good shot away from 14 yards out, but McDonald made another good stop, and just managed to get his hands on the loose ball before Murphy could knick it past him and finish to an empty net.

Chances were coming more frequently now, and in their desperation to get the all-important equaliser, Portlaoise were leaving oceans of room at the back. In the final minute of normal time they looked to have been caught out when Liam Donnelly was given a free run on goal with Sean McCormack left exposed, but the teenage Portlaoise 'keeper made a stunning save to deny Edenderry a third goal.

Portlaoise tried to make his late act of brilliance worthwhile, but the closest they game to levelling the game came when James Mullaney got forward from centre-half and shot on the half-volley from the edge of the area, but his rising shot flew a couple of yards over the bar.