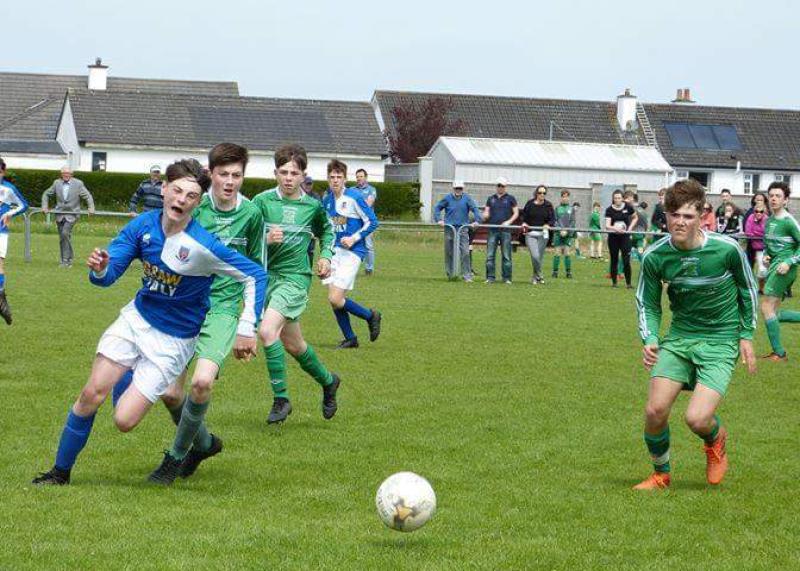 Portaoise U-15s travelled to Clara on Saturday for their SFAI regional final versus Tullamore.

A warm sunny morning meant ideal conditions for the game. Tullamore, however settled right from the start and found themselves ahead after only five minutes.

A through ball found the strikee just about onside and it left Conall Rowney in the Portlaoise goal with no chance.

Portlaoise settled and started to pass the ball about but with only ten minutes gone disaster struck again. A high ball from midfield deceived the defenders and first to react was the Tullamore striker, who finished with a powerful shot again giving the keeper no chance.

The Portlaoise lads kicked off and from here until half time they upped their game and were the better team. Kieran O'Donnell, who stepped up from the U-14s was great at centre back beside Darragh Kelly. Their dominance allowed full-backs Jamie Preston and Michael Culliton to push forward.

Wingers Jason Horan and James Wheeler got more of the ball and started to create chances. Josh Hogan and Daire McDonald linked well and McDonald fed the ball to James Wheeler. James held it up and played a great return pass to McDonald.

Daire drove towards the Tullamore box and although the keeper made a fine save, Luke Dunne-O'Connor followed up and finished to the net, making it 2-1 and game was on now.

Jason Horan saw his cross deflected onto the Tullamore post with the keeper beaten. Next up Tiernan Cahill was played in by Josh Hogan but his shot was just wide.

Portlaoise kept the pressure up and Cahill was unlucky with a header from a corner. Half time arrived with Portlaoise on top but still 2-1 down.

The second half was a very even contest although Portlaoise started the half strongly. Luke Dunne-O'Connor and Tiernan Cahill were getting plenty of ball high up the field and half chances were being created.

Then, from a long ball James Wheeler got the equaliser, a goal thoroughly deserved for the effort he had put in. Momentum was with Portlaoise, but Tullamore lifted their game and started to make chances of their own.

The game was end to end and both teams were matching the intensity of the game with some great football. Colin McEvoy was introduced.

Luke Dunne O'Connor found space in the box but was unlucky to see the keeper hold his powerful shot. It seemed like the game was heading to extra time but there was one last twist.

Unfortunately for Portlaoise a cross from near the corner flag sailed over everyone and went into the net off the backpost. It was a cruel blow for Portlaoise who had played really well since going two down early.

As they pushed to try level it up an error at the back gifted a fourth goal to Tullamore. The Portlaoise lads had given everything. It was a tough week for them knowing three of their team mates and starters in this team were unavailable due other commitments, denying the young players the opportunity to play in the final. But the team and the U-14s who stepped in to play on the day should be very proud of their performance.

Their last game of the season is the Midlands Cup final this Thursday, May 24th at Rossleighan where they get another chance to win some silverware this season.