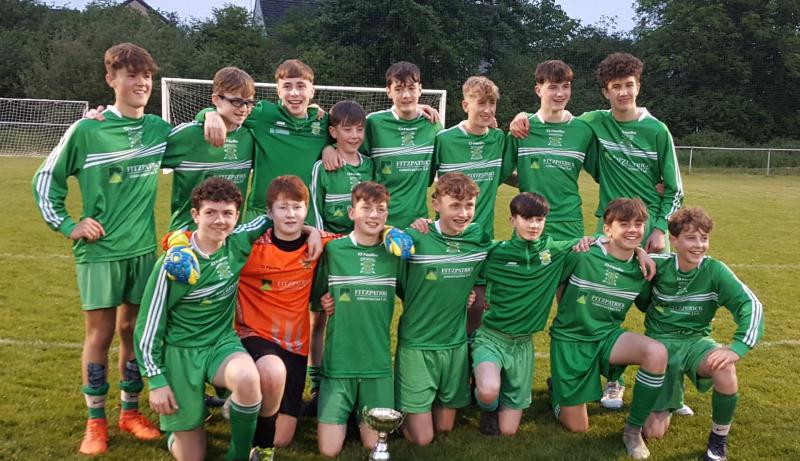 The Portlaoise AFC U-15s which won the MSL Cup.

Tullamore arrived in Rossleighan on Thursday evening full of confidence after their SFAI regional cup victory the previous Saturday.

Portlaoise however were determined to end the season with some silverware and this Midlands cup final was set up to be a great game.

The teams had not really settled down when disaster struck for Portlaoise. With barely five minutes on the clock Tullamore freed Charlie Mitchell, and his ball pulled back across the goal and was finished to the net by David Trainor.

Both teams eventually settled down and started to play some good football, but with neither defences being tested. Portlaoise made their first chance after 17 minutes when Daire McDonald set James Wheeler through on the left but the defence forced James wide.

Five minutes later and Luke Dunne-O'Connor sent James free again but one more time the chance was snuffed out. Both midfields were playing well, but finding the right pass to create a chance was proving difficult.

Kieran Walshe and Darragh Kelly were controlling the back for Portlaoise with Michael Culliton and Jamie Preston defending well on the flanks. Luke Dunne-O'Connor had the next chance for the home team but his free kick sailed high.

An open half of football with very few chances was about to end when once again disaster struck for Portlaoise. Their own kick out was won by the Tullamore midfield and two passes later and it was 2-0.

To their credit, Portlaoise came out for the second half determined not to go down without a fight, and they upped the intensity from the kick off. The half that was to follow was going to make up for the lack of chances the first half had provided.

With two minutes gone Daire McDonald had the first shot from distance after a throw in on the left. From the resultant kick out Tullamore attacked and forced Conall Rowney to save at the striker’s feet at the expense of a corner.

Portlaoise attacked again and Ben Dempsey’s cross set up Kyle Enright to shoot. Next up Jamie Preston intercepted a Tullamore clearance and Luke Dunne-O'Connor was fouled 25 yards from goals.

Luke took the free kick himself and floated it into the top corner to get Portlaoise their first goal. It was 2-1 and game on again.

Moments later and Conall Rowney parried a Tullamore free kick and then made two great saves from the follow up chances. The game was end to end stuff with chances almost every minute.

Brian Smith tested the Tullamore keeper with a powerful shot. Then after 15 minutes of the half a throw in on the right side from Jamie Preston found Luke Dunne-O'Connor in space. He played a ball into the centre to Brian Smith who turned and sent Jason Horan free on the left. Jason took the ball in his stride and his powerful shot high into the net gave the Tullamore keeper no chance. The game was level at 2-2.

Within minutes, hesitation in the Portlaoise defence allowed the Tullamore striker to shoot but he blazed over the bar. Immediately Daire McDonald won the ball and found Luke Dunne-O'Connor. He set up Josh Hogan who fired his shot over the bar.

Luke then shot inches over from a pass from a throw in on the left after good attacking play from left back Michael Culliton as Portlaoise dominated the game. Brian Smith and Jason Horan linked to set up Kieran Walshe who brought a smart save from the keeper.

Kyle Enright was fouled from the resultant corner and Luke again went close from a free kick. A great half finished with the scores level at 2-2 and extra time would be needed.

Extra time continued as the second half had. Kieran Walshe tried his luck from distance in the first minute as he spotted the keeper off his line. But it would only take five minutes for Portlaoise to get ahead in the game.

A save for Rowney was followed by a quick ball to his full back Jamie Preston who found Luke Dunne-O'Connor. His flick on fell kindly for Brian Smith who made space for himself and found the bottom corner of the net from 25 yards.

The home team were still dominating but a ball behind the defence had them on the back foot. Darragh Kelly was judged to have fouled the striker and conceded a penalty and got himself a yellow card. Conall Rowney however made a great save diving to his right.

Just as the first half of extra time was coming to an end a ball into the Portlaoise box bounced off Kelly’s thigh and hit him on the hand. Tullamore got their second penalty and Darragh got his second yellow card and Portlaoise were down to 10 men. Incredibly, Rowney saved again from the penalty, this time going to his right and gathering the rebound after it struck the post.

The second half of extra time was tough on the ten men. Tiernan Cahill was isolated up front and had the tough job of chasing down every ball and defending from the front for Portlaoise.

Tired legs eventually got caught out from a ball over the top and a good run which beat the offside trap. The Tullamore keeper finished calmly and we were tied at 3-3 each. The game ended with two tired teams cancelling each other out for the last five minutes and we were on to the dreaded penalty shootout.

Portlaoise went first in the shootout and Michael Culliton scored to put them ahead. Once again Conall Rowney came up with another penalty save and that was enough for Portlaoise.

Kieran Walshe, Ben Dempsey, Tiernan Cahill and Luke Dunne O'Connor all kept their nerves and dispatched all their penalties to the net with confidence.

Two great teams had just played a great game of football and Portlaoise had won by the narrowest of margins 5-4 in a shootout. This group of players finish the season deservedly as Midland cup winners for the second season in a row.