Three wins out of two for Portlaoise AFC juveniles 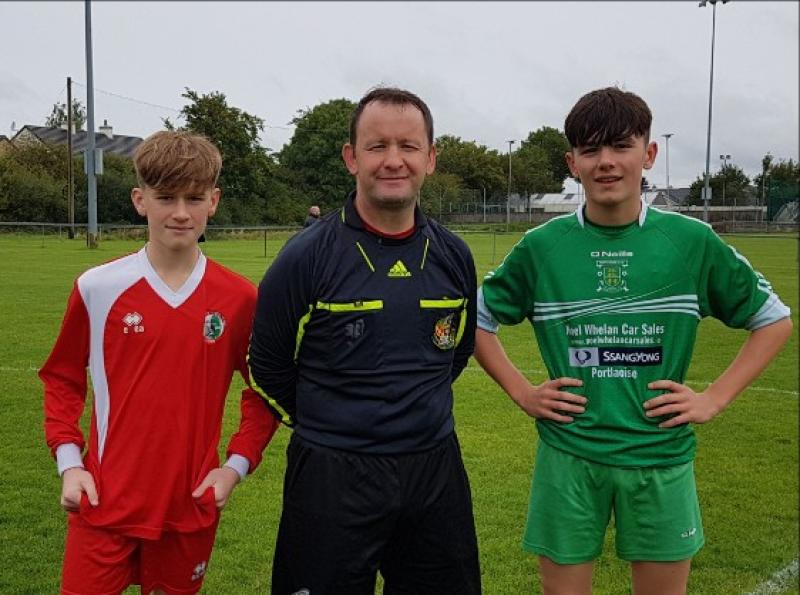 Portlaoise U-16s welcomed Tullamore Town to the Leisure Centre on Saturday for a lunch time kick off. These two teams met six times last season in all competitions, ending up with two wins each and two draws.

Portlaoise started brightly. Tullamore, playing with only one striker, gave the home team’s back line of Jamie Preston, Kyle Enright, Darragh Kelly and Michael Culliton plenty of time on the ball and they used this well to push forward, and this possession was creating openings for the attackers.

Tiernan Cahill was unlucky not to be on the score sheet early as he brought two fine saves from the Tullamore keeper. Daire McDonald and then Finn Culleton created the chances for him from midfield.

Tobi Olaoye however did open the scoring on 18 minutes. Good work from Kyle Enright and Josh Hogan freed Jason Horan down the left wing and his cross was finished to the net by Tobi. Ten minutes later and Portlaoise doubled their lead.

This time the build-up play came from the right-hand side when Jamie Preston, Tobi and James Wheeler linked up. James’ cross into the box struck the post and Tobi was first to react and netted his second.

Tullamore were a threat on the break all game but the Portlaoise midfield and back four battled hard to minimise the attacks. The game became scrappy for the rest of the half but Portlaoise were happy to get to the break 2-0 up.

The home team were on the front foot right from the start of the second half. With only five minutes on the clock they scored again. This time Brian Smith got through on the right channel and his ball into the middle was finished by Tobi to complete his hat trick.

Tullamore heads dropped a little and they were probably lucky not to concede more early in the half. Portlaoise were breaking at will, with options left and right but unfortunately the final passes were either off the mark or too slow in being delivered. This allowed the away team to get a foothold in the game again and on the back of this Tullamore won a series of free kicks in the Portlaoise half.

Conall Rowney made several good saves from these, and Darragh Kelly and Gearoid Dempsey won any loose ball that came through the middle of the pitch. With 15 minutes left however, Tullamore made it 3-1 and they broke the offside trap and the striker gave Rowney no chance with his finish.

This seemed to spur the home team on and Portlaoise upped the pace and energy levels again. Finn Culleton made the game safe and the score 4-1 when he scored. Brian Smith linked with Finn and he scored in off the underside of the bar.

This was a good performance from Portlaoise, but they know they need to keep improving as the season rolls on. The team are away in two weeks’ time in the next round of the SFAI cup where a tough trip to Kildare awaits.

The Portlaoise Athletic U-11s made a rare excursion into Offaly on Saturday last for their return fixture with the Walsh Island Shamrocks.

The sun stayed away for the duration but there were plenty of stars out on the pitch, with a dazzling array of skills keeping the large Portlaoise support warm on the sideline. The coaches had focussed their prematch team talk on putting the hard work of training into practice on match day and the players delivered almost immediately.

Excellent pressure from the excellent Dee Harding won a corner and Ben Peacham’s inch perfect delivery was met by a bullet header from Eoghan Kennedy to open the scoring. A defensive lapse shortly after allowed the home side to level matters but Portlaoise took over from there.

A speculative effort from Cian Fitzpatrick on the halfway line found its way to the back of the net before Kennedy added a third, taking the ball over a defender before volleying to the far corner. The industrious Peacham got in on the act next, his fine finish to the corner a just reward for his tireless running which was putting the hosts under pressure regardless of which side was in possession.

Walsh Island had their chances also and only for some fine defending from Jack Murtagh and Jack Phelan they could have troubled Ethan Kelly in goals, who dealt expertly with the ball that did come his way. Alex Moore was providing plenty of cover for the defence from his midfield role and he was also in the thick of the Portlaoise attacks.

The ethos of hard work shown by this Portlaoise side, superbly demonstrated by Harding in particular, yielded another early in the second half, with Sean Conka putting his body on the line to win possession before setting Darren Mbeng up for the goal.

As with last week, Conka’s hard work and unselfishness on that occasion was rewarded just minutes later when he was put through himself to finish expertly past the Shamrocks’ goalkeeper. Kelly then produced a miracle save when a Shamrocks goal seemed inevitable, while Kayden Carroll and Luke Fagan were tackling like demons in front of him.

Josh Dempsey, who had come off injured early in the first half, was reintroduced and he made up for lost time almost immediately. His first came after a superb kickout from ‘keeper Kelly found him on half way and he jinked by two defenders before rifling home.

He then unleashed another thunderbolt which the ‘keeper did well to save but Jack Phelan was on hand to tuck the rebound away, another area that the coaches had been working on over the last few weeks.

Dempsey proceeded to grab himself a hat-trick, with two fine finishes with his right to the corner before Peacham wrapped up a Man of the Match performance with a superb goal of his own.

With a display full of endeavour and no little skill, Peacham displayed an uncanny ability, rare enough at this young age, of choosing the right option more often than not and he was rightfully chosen by the Walsh Island management as the Portlaoise player of the game, although all of the 13 players on show can be extremely happy with their performances.

The development of this great bunch of lads is evident from week to week and the coaches are extremely proud of the work ethic and determination being shown by all who wear the jersey.

For the second week in a row Portlaoise Utd came out the wrong end of a eight goal thriller, again losing by two in the end to local side Emo Celtic.

Despite recent heavy rain the pitch was in excellent condition, with the visitors starting strongly and forcing some early corners. Andrew Goggin and Callum Leonard were providing some relief for Portlaoise down the right flank, while central midfielder Cian Bartley-Bray had Portlaoise's first shot on goal ten minutes in.

Within two minutes of this Emo took a deserved lead after hesitation in the Portlaoise defence.

Callum Leonard again threatened for Portlaoise but was just pipped by the Emo keeper, while at the other end Aidan Keane pulled off a fine low save to deny Emo a second. John Ging was causing trouble for the Emo defence as Portlaoise clawed their way back into the game, and with eight minutes to the break they got their reward, when a trade mark Andrew Goggin pass picked out Callum Leonard, who rifled home the equaliser.

David Burke made a fine run for Portlaoise as they gained confidence, and things got better for them before the break when Cian Bartley-Bray rifled home from outside the box to score his third goal in two games, another excellent effort.

Emo came chasing the game again, but good defending from Finn Delaney and Tadgh Duffin ensured Portlaoise held the lead at the break.

Minutes after the restart Portlaoise doubled their lead when John Ging was fouled as he teased the Emo defence, and Cian Bartley-Bray's free kick went in off a defender in the confusion.

In true Emo form they refused to throw in the towel, and Hubert Siler pulled off a fine save as again Portlaoise were caught napping in defence. The let off was temporary however, as from the resulting corner Emo were quicker to react and got back into the game with a well-struck effort.

Emo sensed the could rescue the game now, and within minutes had equalised with a well worked goal. Portlaoise were rattled now and lost their composure, and two goals in the last eight minutes wrapped up the points for Emo.

Fionn Devoy had a long range effort for Portlaoise, but apart from that the game fizzled out without any more action. A disappointing result again for Portlaoise, at one stage they looked to have control of the game when 3-1 up, but Emo's never say die attitude again produced the goods.

Again credit to the referee, this time Niall Culliton who handled the game in a sensible manner.